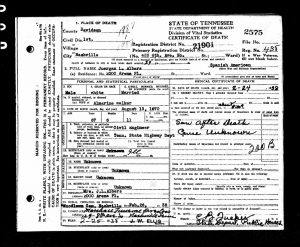 The February 1938 death certificate for “Juergan Albers” indicated that he was buried in Nashville’s Woodlawn Cemetery on 26 February–just two days after he died. No mention is made to Nashville’s veteran’s cemetery where he has a military headstone.

The 67-year old Spanish American War veteran was employed as a civil engineer for the Tennessee State Highway department at the time of his death. Albers was living at 2000 Arena Place in Nashville at the time of his death and was survived by his wife Almarine. The death certificate indicated Jurgen died at 8:30 am at 426 6th Avenue North in Nashville but does not indicate what is at that location, but since no hospital is named we can conclude the death did not take place in a hospital. A doctor from the State Department of Public Health indicated that Albers body was viewed after his death and that the cause of death was “unknown.”

No mention is made of Albers’ burial in Nashville’s National Cemetery which is indicated on his interment card.  The interment date in that cemetery is 1942.  What happened in 1942 to cause his body to be moved?

And still nothing on Frazier Albers whose name is inscribed on the back of Jurgen’s stone in the Nashville’s National Cemetery.