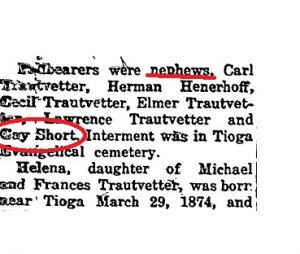 I have to constantly remind myself that in a variety of records (particularly newspapers) that relationships may not always be stated precisely and that terms may not mean quite what we think they mean.

When my aunt died in Tioga, Hancock County, Illinois, in the 1940s six men were listed as being pallbearers at her funeral. The newspaper refers to them as her nephews.  Five of them (Carl, Cecil, Elmer,and Lawrence Trautvetter and Herman Henerhoff) were actually her nephews (sons of her two brothers and one sister). The last pallbearer listed, Gay Short, was actually her nephew-in-law and was married to her niece, Lillian Trautvetter Short (sister to Carl, Cecil, and Elmer).

In this situation, being familiar with the family, the slight nuance in the use of the word was easy to notice.

But it served as a reminder to me that sometimes relationships may be stated in such a way that the connection sounds biological when it is not.