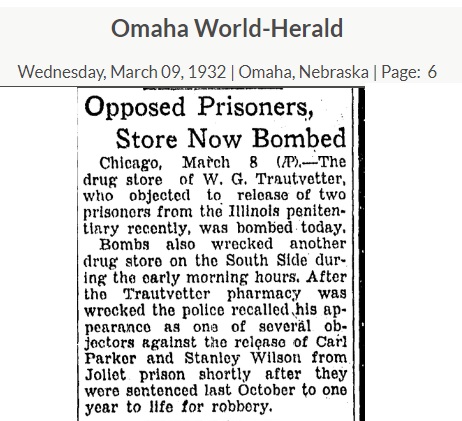 References to relatives can easily appear in newspapers a distance from their home.

This 1932 reference from the Omaha World-Herald mentions a drug store bombing in Chicago, Illinois, in 1932. The store of W. G. Trautvetter was bombed along with another drug store on Chicago’s South Side.

This is a case where references to local newspapers may provide more information on both the 1932 bombing and the sentencing of Carl Parker and Stanley Wilson. The search for more information should not end with newspapers. Printed references in the Chicago area should provide more details for an effective search of records in that area. It is very possible that, even though this article was from the Associated Press, there are factual details that are incorrect.

This newspaper clipping was located on  GenealogyBank.