This sale referenced in this sale bill was the result of a 1908 Hancock County, Illinois, court case involving the widow of Riley Rampley and his children. Riley had died in 1893 leaving a farm, a widow, eleven children, and no will. His estate was never brought to probate and in 1908, this partition suit was filed in the Hancock County court. 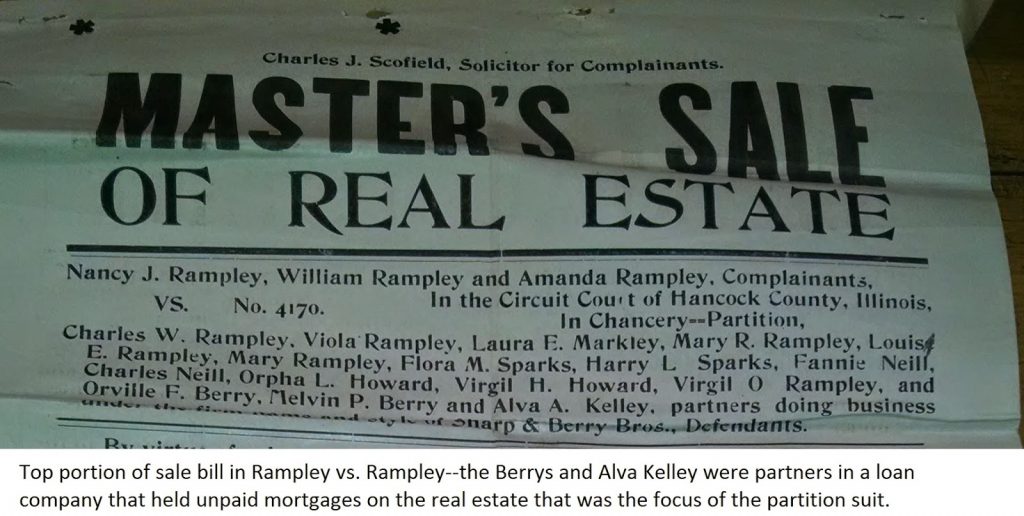 This is the court case to which Fannie Neill received a summons in February of 1908 when the sheriff returned a notice that she could not be found in the county and left a notice with her husband.

I’m not certain why Nancy and her one son William (along with his wife Amanda who had a dower interest in the interest in the real estate her husband had inherited) were the plaintiffs in the suit. There were defendants in the case besides Riley’s heirs. The Berrys and Alva Kelley were also defendants in the suit because they held mortgages to the farm that had been executed by several of Riley’s heirs after his demise.

The tenants on the Rampley farm also had to be defendants–but they were also heirs.

And that may have been part of the problem—but just a part. Stay tuned