FamilySearch recently announced that “Iowa, Records of Persons Subject to Military Duty, 1862-1910” was new or had been updated.

A search of that database for the last name of Cawiezell indicated one individual in the database with that last name. There were a total of 37 results, but none of the other thirty-six had the Cawiezell spelling–all were variants on that name.

The individual entry for Richard is not very specific and anyone reading it quickly might make the wrong conclusion regarding what the document actually says. The title does clearly indicate that these are records of individuals subject to military duty between 1862 and 1910. The “event type” states military service, but there is no guarantee that a specific individual listed actually was a member of the military. The records usually provide the person’s age and residence (at least as specific as the county with township or city of residence in many cases). 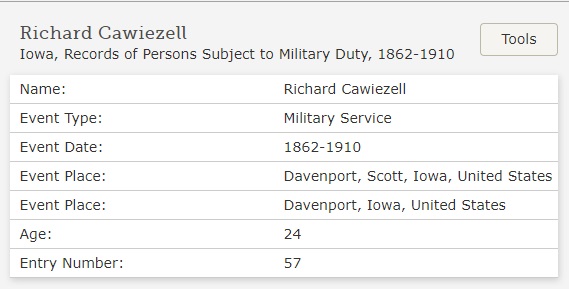 Viewing the image for Richard indicated that he was not the only Cawiezell on the page, even though the index indicated that he was the only Cawiezell man in the set of records. In fact there were two others: Jos. H. and Adolf. Why they were not in the index is unknown as they are listed consecutively in the record and the handwriting is very consistent.

This entry makes the point that the researcher needs to find out exactly what they are looking at–not just grab the image and go. The heading of the page indicated that the list the Cawiezell men appeared on was a list of “Persons in Davenport Township, Scott County, Iowa, liable to do military duty, 1908.”

Working earlier in the images, some of the source information was obtained. The list was apparently originally contained in a folder which essentially contained the same information as the heading of the page on which the Cawiezells were listed.

The cover sheet for the 1908 list for Scott County, Iowa, gave totals of the number of persons liable for military service throughout the county. 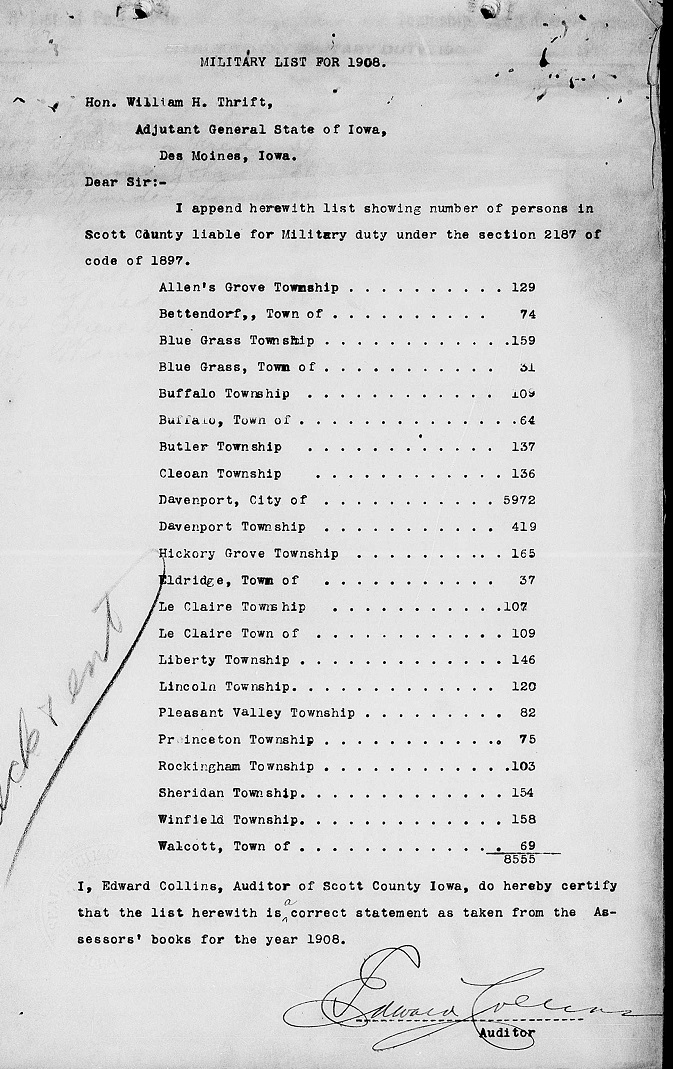 Earlier records were browsed and apparently the next earliest list for Scott County was for 1904.

Now the only thing I need to do is make source citation for this record.