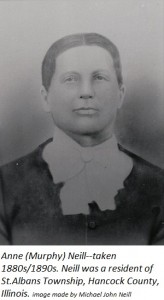 The conclusion is that Anne was born around 1845 in Ireland. At this point, it has been decided to research the bondsman on the marriage further.