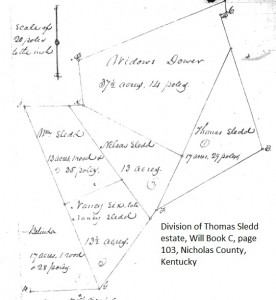 Thomas Sledd died in Bourbon County, Kentucky, around 1815. It took the family years to settle up his farm and it took me years to find the deeds that partitioned that farm among his heirs.

The dates of birth for the children of Thomas and Sarah/Sally (Tinsley) Sledd are not precisely known. That’s pretty typical for people born in Virginia or Kentucky during this time period. Thomas and Sally were married in Amherst County, Virginia, in 1798. Assuming that his five children were born during his marriage to Sally, almost all of them would have been minors upon his death. It is possible that the division of his estate did not take place until the youngest child reached the age of majority. That would explain why farm was finally partitioned in 1831.

The drawing of property partition was an added bonus.