Obituaries are one of those genealogical sources that are chock-full of statements. The accuracy of those statements range from “true” to “false” and all shades of veracity in between. Those statements often from a variety of “places,” from individuals with varying ideas of what is correct. 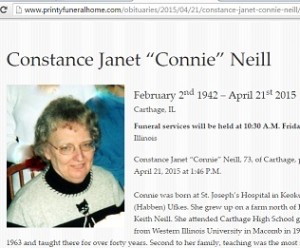 This post includes a copy of my Mother’s obituary copied and pasted from the funeral home website, along with an analysis of each sentence. Most of the time we don’t have the luxury of knowing how information got into an obituary.

Would it still be an authored narrative?

And what if one of the family members calls and asked for something to be changed in the online obituary after it has been used to publish the obituary in the newspaper?

One could spend hours debating such classifications and not have any time left over to decide how many angels one could fit on the head of a pin.

I’m not certain it actually matters.

There. I said it.

What matters is how this text came to me where I could use it as a “source.” If classifying something is so important that one has to guess or infer something about the record in order to classify it, then one should re-evaluate how important the classification process actually is. The genealogist should clearly, accurately, and completely describe where the obituary came was located and how it was accessed. That’s what matters.

That’s what will allow the researcher to later re-evaluate their evaluation of that record if necessary or will allow others to evaluate the source for themselves.

If you can’t tell me where a source was located, does it really matter if it is classified as original source, a derivative source, or authored narrative? What I prefer to know is where you obtained the record. If I don’t have that, any classification is meaningless because it was done without context.

I wrote the original draft of Mom’s obituary on a legal pad. Don’t ask me exactly what day or what time. All I remember is that I wrote it one night at the nursing home in Mendon, Adams County, Illinois, in April of 2015. I used a number two pencil. I was sitting in a chair. The legal pad was on my lap. Mom was asleep and I certainly was not going to wake up a dying woman to clarify something for her obituary. The legal pad was stuffed into my duffle bag after the obituary was written and not looked at or thought about until after Mom had died.

The copy I wrote was given to the mortician. The only alteration I made to my original handwritten copy was to add in the names of the step-grandsons. There was no “grammar check” and the only “proofing” I did was to read it to my father the morning after Mom died.

The mortician added the death information and the funeral information. I did not check the published obituary against my written copy as I no longer had it.

Which obituary is the original? Is it the one I wrote? Is it the one the mortician typed up? I cannot remember whether it appeared first on the funeral home website or the newspaper website. Which one is the derivative?

I’m not certain it matters.

When sourcing an obituary, indicate precisely how you obtained it: online at funeral home, online at newspaper, microfilm copy of newspaper, undated newspaper clipping found in Aunt Martha’s family bible, dated clipping found tucked in behind a photograph Uncle Bob had in the attic, etc. Exactly where you found it matters. Your analysis of the facts matters. How you think the information got in the obituary matters (who provided it, how likely they were to know the information, etc.). Those are things you should include in your analysis.

I wrote my Mother’s obituary late one night when she was in the nursing home. It was late. Despite being tired,  I could not sleep and it had become clear to me that Mom’s life was near an end. It was written from memory as I was in no state of mind to check facts or document statements. Writing it meant that I had accepted the inevitable and that was difficult enough. The only specific fact that was eventually checked against any sort of evidence was her year of graduation from Western. That was accidental because I came across her diploma while searching for a photograph of her for the funeral home. had that not happened it would have been wrong in the obituary with only myself to blame.

Normal type is used to indicate the original obituary text. Bracketed italics are my comments.

Constance Janet “Connie” Neill, 73, of Carthage, passed away at the North Adams Home in Mendon on Tuesday, April 21, 2015 at 1:46 P.M. [There are several statements in this one sentence: Mom’s name, her age, her residence, and her date and place of death. This sentence was presumably written by the funeral home as I did not write it. Her age was probably calculated from her date of birth, her residence was, well, “common knowledge,” and the date and place of death several can attest to, myself included. This sentence serves as an excellent reminder that one sentence can contain several facts from several different sources with potentially varying levels of knowledge.]

[I wrote the following paragraph which was slightly edited by the funeral home. Additional comments are noted after each sentence.]

Connie was born at St. Joseph’s Hospital in Keokuk, Iowa on February 2, 1942, the daughter of John H. and Dorothy (Habben) Ufkes. [Obviously I don’t have first hand knowledge of this information. I was aware of whom Mom’s parents were as they were alive until I was nearly forty. Mom’s date and place of birth was something she had told me numerous times, although I don’t ever remember having seen her birth certificate. She was well aware of being born on Groundhog’s Day and when hospitalized and had to give her name and date of birth to the nurse (repeatedly several times every day) she would always say “two-two-forty-two” as a little rhyme.While that proves nothing, it does indicate what she believed.] She grew up on a farm north of Ferris where she attended grade school and met her future husband, Keith Neill. [Again, my knowledge of this is second hand, although where Mom grew up was something I was told by her and her parents and was evidenced by various school materials I had seen over the years. I now realize I can’t remember the name of the rented farm on which they lived.] She attended Carthage High School graduating in 1960. [I don’t remember ever having seen Mom’s high school diploma, but I did see her high school yearbook which indicated she was a senior that year. I remember that she, my Dad, and my aunt, all graduated high school the same year and there was a high school reunion mug she had that gave the same year as I remembered.] She then went on to receive her B.A. in Education from Western Illinois University in Macomb in 1965. [This sentence was originally written from memory and I thought Mom graduated in 1964–the year after she started teaching. Mom always told me she had finished up enough coursework to start teaching after three years of college and had then finished up her degree the following year. Before the obituary actually ran, I came across her diploma which gave the year and degree type as stated in the obituary.] She began teaching elementary school at Carthage in the fall of 1963 and taught there for over forty years. [The year Mom started teaching was from what I remembered being told, going back to starting three years after she graduated from high school.] Second to her family, teaching was the most important thing in her life. [Difficult to “source” this, but I distinctly remember writing it as I felt there needed to be something sentimental in the obituary.] On May 28, 1967, she was united in marriage to Keith Neill at Trinity Lutheran Church in Carthage. [Written from my memory of what I was told and from having seen the wedding announcement and pictures more than once.] She and Keith farmed north of Carthage all their married life. [This comes from personal knowledge and life experience although I was not born until June of 1968.] Connie was a lifelong member of Trinity Lutheran Church in Carthage. [My knowledge of this only begins at the point in time where I can remember things, but  Mom shared recollections of it at various times and I have no reason to doubt it, but I didn’t obtain evidence for the obituary.]

Connie is survived by her husband, Keith of Carthage; two sons, Michael (Melissa) Neill of Rio, Illinois and David (Shelly) Neill of Carthage; two granddaughters, Sarah and Katherine Neill of Rio; two step-grandsons, Jeremy and Josh Roberts; two aunts, Ruth Ufkes of Des Plaines, Illinois and Joan Ufkes of Carthage; and many first cousins. [First hand knowledge of all names and relationships except for the last names of the step-grandsons. As always, I went based upon what I was always told.]

[The rest is from the funeral home.]

Funeral services will be held at Printy Funeral Home on Friday morning, April 24, 2015 at 10:30 A.M. with burial to follow in Moss Ridge Cemetery. There will be no visitation.  Memorials may be directed to Trinity Lutheran Church in Carthage or Hearts of Hancock Humane Society in Hancock County. Printy Funeral Home of Carthage is in charge of arrangements.  Condolences may be sent to Michael Neill at mjnrootdig@gmail.com.

We rarely have details on how an obituary or other source was compiled. Think about that the next time you glean information from an obituary.

Think about where you got the obituary.

Think about how the information likely was put in the obituary.