3 November 1873 the steamship Weser arrived in New York City. Focke Goldenstein was on board.

As we saw in an earlier blog post, Focke’s father had written a letter in support of his immigration in September of 1873. In that post, I indicated that Focke probably never saw his parents (Johann Lucken and Tjode Anna Focken (Tammen) Goldenstein) again. It appears that I was wrong.

A complete search of New York City passenger manifest entries located another entry for Focke Goldenstein. This one was in 1879.

The question is: how many United States citizens are named Focke Goldenstein who would have been twenty-one years of age in 1879? This age is fairly consistent with the date of birth for the known Focke Goldenstein which was 12 January 1857 in Wrisse, Ostfriesland, Germany. The known Focke would have been twenty-two at the time the Oder landed in New York. The difference is not significant.

The known Focke Goldenstein became a naturalized citizen on 31 March 1879 in Knox County, Illinois. The “index card” is used as an illustration in this post, but the actual naturalization record has the same date. As the card indicates, Goldenstein’s naturalizat 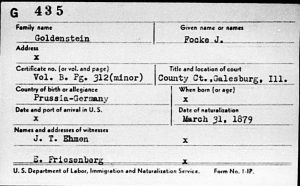 It is noted that Goldenstein apparently naturalized shortly before he apparently made a return trip to Germany. This likely is not coincidental and could have been done to avoid being drafted into military service while overseas.