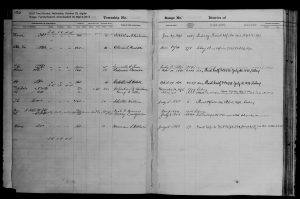 BLM Tract Books for the State of Nebraska, Volume 29.

These cancelled files contain all the homestead paperwork that had been submitted as of the date of cancellation. This should include the filing of the initial claim. Additional paperwork in the cancelled file will vary depending upon how actively the homestead claimant pursued their claim, whether they had to document citizenship, whether the claim was relinquished voluntarily, if the claim was contested, etc.

The cancelled claims are organized by file numbers assigned to them by the land office. Those numbers appear to have been assigned in the order in which the claims were cancelled. There is no index–well at least not directly.

Finding these cancelled claims requires a use of the Bureau of Land Management’s tract books. These books are organized by land office or by state (depending upon the period and the location) and require the knowledge of where the claim was located as the tract books organize their entries based upon the specific legal description of the land (township, section, quarter section, etc.)

If the tract books are organized geographically and not alphabetically and I don’t know where the property is, how should these records be searched?

Manually searching an entire township is not a formidable task–most are under twenty pages. Searching an entire county obviously takes longer and adjacent county searches may be warranted, depending upon where in a given county a relative is likely to have established a homestead.

The cancelled claim for Mary Duignan was in section 35 of township 18N 44W. It was cancelled as shown in the illustration.

There is a notation that the claim was actually relinquished at the North Platte land office with a preceding file number of 01741. That’s the number to locate the cancelled homestead file. Those cancelled files are organized by land office and then by file number.

Mary’s claim was used solely as an illustration. The digitized files currently on FamilySearch start in 1907 and my “people of interest” had all either filed claims or moved on from Nebraska or Kansas by then.

We will show some sample files in an upcoming post.

More on the BLM tract books can be seen in our Genealogy Search Tip of the Day post.

Details on my BLM tract book webinar can be found here.