“U.S., Army Transport Service, Passenger Lists, 1910-1939” has been on Ancestry.com for a while, but after seeing some fellow researchers post images I decided to revisit the database. 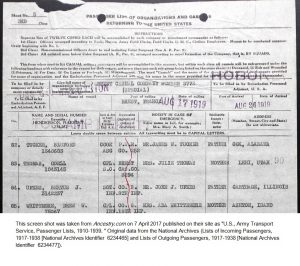 I knew that Bertus’ father was living at the time of World War I, but if I had not then this would have been helpful.

This database apparently can be searched by name of emergency contact if those words are put in the keyword box.

We’ll have a future post with a few additional suggestions for using this database and a neat discovery I made as well.