She was born Anna Lisa Eriksdotter in Ostergotland, Sweden, in 1829. I was fairly certain she had died in Sweden as well, but I really was not entirely certain. Some of her children immigrated to the United States and some remained in Sweden, so it was always possible that she had immigrated. To be honest, I never tried to locate her death entry in the Swedish records, particularly years ago when my access to records solely via microfilm.  Without a date of death for her, I focused on other family members.

With Ancestry.com recently releasing or updating their “Sweden, Indexed Death Records, 1840-1942,” I decided to try and locate her again, using several variations of her first name and her last name of Eriksdotter.  Most of my Swedish research had been in the 19th century and the females I had researched were usually listed with their maiden name. Anna lived into the 20th century and my research approach needed to reflect that. She was listed under her husband’s surname of Sund.

Anna Sund was located in Ancestry.com‘s “Sweden, Indexed Death Records, 1840-1942” in the exact location where I expected her t 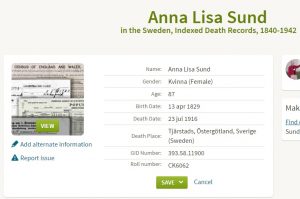 o be: Tjarstad. The index entry indicated 1829 year of birth. It probably was her. But I learned a long time ago that some Swedish names that I may think are unusual are exceedingly common. The index entry alone was not sufficient.

At the time of this writing her image was not loading in this database, but the index entry did indicate that an Anna Sund born in 1829 had died in Tjarstad in 1916. Since the index gave the year of death it was decided to manually search the online Swedish church records at Ancestry.com (published as “Sweden, Church Records, 1451-1943“). Working through one year of deaths would not be difficult.

And it was not.

Before I located this death record, I had assumed Anna died of some complication of childbirth in the 1850s or so. But now that I know she lived until 1916, I’m wondering:

are there pictures or her anywhere? 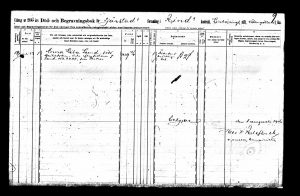