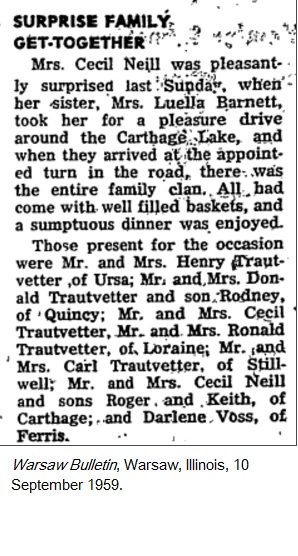 They threw my Grandma Neill a 49th birthday party!

Grandma always said it when something surprised her and I can just hear her saying it as my Aunt Luella finished her drive around the lake and Grandma realized what was going on.

I said it when I first realized that the entire collection of extant newspapers for Warsaw, Illinois, had been digitized.

Now that I’ve played with the digital images of Warsaw, Hancock County, Illinois, newspapers  and the new for me has worn off, it is time to get organized in how I search and download these images. There is just too much there for me to have an unorganized approach to using the materials. Compounding the issue is that the site also includes newspapers from the county seat beginning roughly when the Warsaw paper ceased to exist. When “your people” have lived in the area since the 1840s it makes for a lot of references. Searches for some of my more unusual surnames of Rampley and Trautvetter bring about more results than I can ever hope to wade through(and many that really just aren’t going to be helpful). I can’t just type in some of my surnames and look at every reference like I can at other sites.

Like many small town newspapers, news from other nearby places is included. It’s not just my family who resided in Warsaw that are included in the papers. The paper included a fair amount of news from the southwestern portion of Hancock County, lllinois–which is where my paternal families lived from the moment they moved to the county. I’m going to have to develop a systematic approach once I have gotten beyond searching for specific individuals and specific events. I’m also going to have to create a database of items I have located so that I don’t pull up and save multiple copies of the same notice.

After all, birthday parties and reunions are going to show up repeatedly in my search results because they contain so many names.

But I don’t need to wade through every property tax list that was ever published in the newspaper.

We will be discussing some search techniques and results organization in future postings. Because sooner or later the newspapers for a few other ancestral hometowns will eventually make their way online and I hopefully will be fortunate enough to have the same problem.