I’ve mentioned numerous times the little “visiting” references one often encounters in US newspapers from the late 19th and early 20th centuries. I’ve used them as examples in lectures, etc. For all those times, the reference did not provide me with a location or a relationship of which I was not already aware. At the very best, the “visiting” items I had located in small town newspaper had helped me narrow down a time frame when a person lived in a certain area, but there were never any previously unknown areas of residents or relatives. 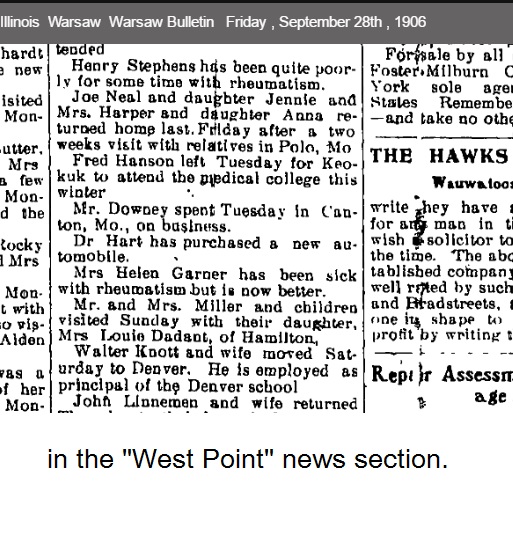 Until this clipping from the Warsaw Bulletin on 28 September 1906 was discovered. The Illinois newspaper contained “news” (such as it was) from several outlying locations, including the village of West Point, Illinois. My uncle Joe Neill had returned from a trip to Polo, Missouri.

Joe’s wife, Anne (Brice) Neill, was deceased by 1906 and is not mentioned. She was a sister to the “Mrs. Harper” that traveled with Joe Neill and his daughter Jennie. The unnamed relatives in Polo, Missouri, are likely connected to the Brice family. Had I not known the connection between Joe Neill and Mrs. Harper determining that would have been a good place to start following up on this lead.

And if I had been unable to locate how the Neills and the Harpers were connected to each other, I could have started my search for newspapers in the Polo, Missouri, area to see if there was any mention of the Neills and Harpers coming to visit.  That would have told me who they were visiting.