I was in high school and I wanted to join First Families of Ohio.

The reason was simple: I wanted to prove something well enough for someone else to believe it, not because I really wanted to join anything. And it was the only lineage society I knew I was eligible for at the time. There was just one problem: Thomas Rampley was not in the 1820 census and did not appear on any tax lists in time to show his residence in Ohio before the end of 1820. 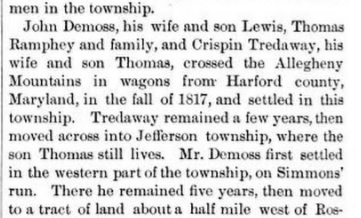 But the county history said that Thomas J. Rampley and his family had arrived in Coshocton County, Ohio, in the fall of 1817–coming in wagons. Certainly that reference would be sufficient. County histories could not contain errors.

It was not to be. The reference was not sufficient to document residence as proof for First Families of Ohio. The printed word would not do.

I needed a workaround.

Years ago, I actually obtained copies of a few selected pages from the Thomas J. Rampley equity case involving Joseph McClung in Harford County, Maryland, that was referenced in an earlier post. The file was large and my budget was small. Consequently I only obtained a copy of the initial petition filed by the attorney on Thomas’ behalf. In that petition it stated that Thomas had moved before the death of his father to Coshocton County, Ohio, with his family where he set up residence and that he returned to Maryland to settle up some business after his father, James Rampley, died.

Of course I didn’t know exactly when James Rampley died either.

But I did know that James Rampley’s will was admitted to probate by a Harford County, Maryland, court in September of 1817.

My first indirect proof–after all, there was not one document that explicitly stated what I was trying to prove. It wasn’t the most elegant or sophisticated proof, but it served the purpose and my membership in First Families of Ohio was approved.