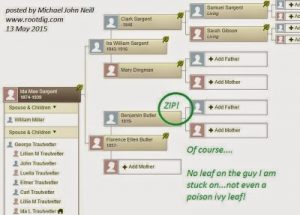 reprinted from 2015 with additions

While generally speaking I am not a fan of the “leaves” at Ancestry.com, there are times when I do check to see if there are suggestions for a person on whom I am really stuck. Sometimes the Ancestry.com leaves float and land in a logical place. Other times they don’t. (see where the “hints and suggestions” on Ancestry.com come from)

I do have records attached to him in my online tree at Ancestry.com so there is something there to use to find leaves. I have Benjamin in the following census records:

I’m not upset nor am I surprised that there are no leaves for my exact Benjamin. He’s been a difficult person to find in other records, partially because he moved around quite a bit. However, given that Benjamin Butler is not the most unusual name, I’m a little surprised that there were no leaves (even really moldy ones) at all for him. It’s not like his name is Providence Schneiderman or something equally unusual.

I’m even surprised that there were no leaves for a William Butler since that’s the name he is enumerated with in 1880.

Benjamin is a good example of one of those people where it can be easy to get “stuck.” Part of the problem is the time period–a significant portion of Benjamin’s life was lived before 1850. He did not serve in a war. He did not apply for any pension or bounty land. He had little estate to probate when he died. He was likely born in a state that did not keep vital records at the time he was born, was not a member of a church that practiced infant baptism, moved frequently, and died in a time period and place where good vital records were not being kept. It really is his fault.

I need to revisit what I know about Benjamin and continue my work on his children. Not all of them are reasonably documented and there are several for whom I do not even have approximate dates of death.

It’s probably time to stop looking for leaves on the trees and focus on Benjamin’s children.