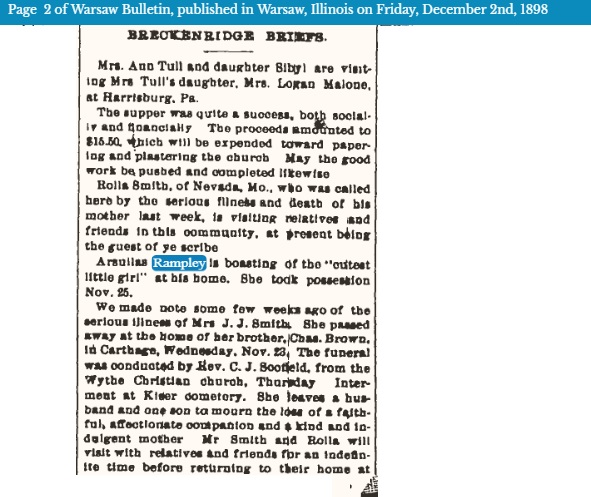 Sometimes statements are clear at the time they are made because there’s unstated context that those hearing or reading the statement know. That point of reference is often used to interpret the statement correctly and those details were common knowledge to someone reading the item when it was printed. It’s not that old statements were made in code. They weren’t. It’s just that when read over a century later, that context is gone. And sometimes things are stated in a way that’s an attempt to be cute or clever. Sometimes these references are easy to interpret and other times they take some time (and some understanding of contemporary culture and events) to understand completely.

The item in this 1898 issue of the Warsaw Bulletin from Warsaw, Illinois, makes the point, although it does not take much deciphering to figure out the intent:

Arsulus Rampley is boasting the “cutest little girl” at his home. She took possession Nov. 25.

Arsulus Rampley (and presumably his wife) appear to have had a daughter who was born on 25 November 1898. There is no direct statement to this effect in the reference to Arsulus. The date of the child’s birth could easily be off by a day or two, but the date should be copied directly as stated in the newspaper. This information would be secondary in nature as the unsigned “Breckenridge Briefs” gives no clue as to how the writer came to know the information.

The reference to Rolla Smith’s mother is more typical of these types of entries and more frustrating. Her name is not stated. It’s only known that she must have lived in the general Breckenridge area. It’s important to remember that anyone reading this would probably have known who Rolla Smith’s mother was. Breckenridge was not some urban metropolis and locals would have been familiar with Rolla and his family.

Newspapers are supposed to print news. Who Rolla Smith’s mother was is not news. His visit to town is.

They weren’t concerned about someone from one hundred and twenty years later reading the newspaper. After all those people were not paying subscribers.

And if I’m using this newspaper for my research and I don’t know where Breckenridge is, that also needs to be determined.

Note: Breckenridge is (was) located in the eastern portion of Walker Township in Hancock County, Illinois.