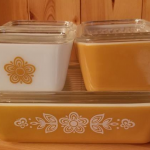 I accompanied my daughter to an antique mall over the holiday season so she could pick up a few pieces of Corelle(r) [correction: it is actually Pyrex–thanks to the reader who pointed this out] dishware she was adding to her collection. While the golden pattern is the same one my mother had, I was just tagging along for the ride on a nice winter day.

While waiting for her pieces to be wrapped and packaged, I browsed through a box of old photographs the mall had for sale. Most had absolutely nothing written on them and probably made their way from an estate sale to the antique mall.

But there were a few that had at least some clue as to their identity written on them.  While it’s tempting to purchase each one, it’s simply not practical to purchase every item that is someone’s lost family heirloom. However, the price of each item was reasonable and within my budget.  I made a stack of photographs with some identification on them.  The price of each photograph was significantly less than a lottery ticket. Given that I am well-aware of my chance of winning any lottery, I chose to go with the photographs instead. 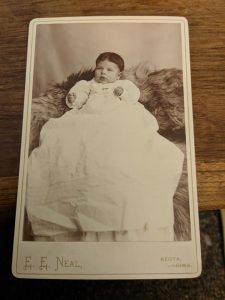 If nothing else the entertainment value of working with old photographs far outweighed any diversion that a lottery ticket would provide. I decided I would post images of the photographs on my Genealogy Tip of the Day page on Facebook as a discussion prompt and, if they could be identified, I would post the image as a “memory” under that person’s name on their FamilySearch tree page. This person was identified as Iowa native Beulah May Korf. The image of the front and back of the photograph was uploaded as a memory on her “Family Tree” page on FamilySearch:

I also contacted an Ancestry.com tree submitter for Beulah to see if they wanted a digital image of her picture. I’d be happy to send the actual photograph to her if she’s interested. 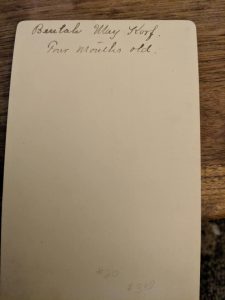 While there are some issues I have with the Family Trees on FamilySearch and I’m not always a big fan of the “cream rises to the surface” approach to life and genealogical research, I do think the “memories” section is a great way to share items of this type. A great way. I know how I felt when I discovered a picture of my third-great-grandparents in the “memories” section of FamilySearch–a picture of two ancestors whose images I had never before seen.

I didn’t get any lottery tickets that, but hopefully in a small way I repaid that person who made me think I’d won the genealogy lottery the day I discovered that picture.

Note: I’ve got a handful of additional pictures to identify and eventually upload.

Note: The dishes have nothing to do with this post, but I asked my daughter for a picture and since she graciously sent it quickly, I thought it best that I use it.