On 7 August 1883 George A. Trautvetter made out application for removal of the dishonorable discharge from his record.

There was not much in the way of rationalization for his leaving the 14th Illinois in the summer of 1865 while it was marching from Kansas to Ft. Kearney, Nebraska. He does mention that he was “wore out” marching across the plains.

He also stated that his “father being [a] very old man and sickley” was part of the reason he went home, along with an apparent request for his return from his mother.

If I had not already known when his parents died, this application would have provided evidence that they were alive at least as late as the close of the war. How ill his father actually was at the time is another matter. The application does not mention that he had two unmarried brothers (very close to him in age) living at home at the time he was needed at home.

The reference to his mother having “needed me very much at home” makes one wonder if there was written communication via letter between George and his family during his military service. If there was such communication, those letters have not survived to the present day. 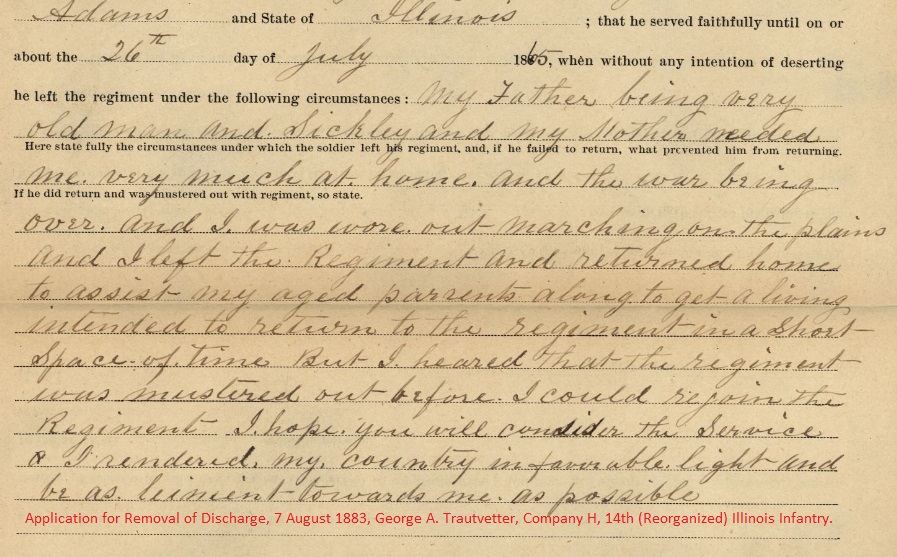 We will have some followups on George’s desertion and application. It’s always important to remember that military service was viewed somewhat differently during the Civil War. There were thousands of men who deserted, both on the North and on the South.