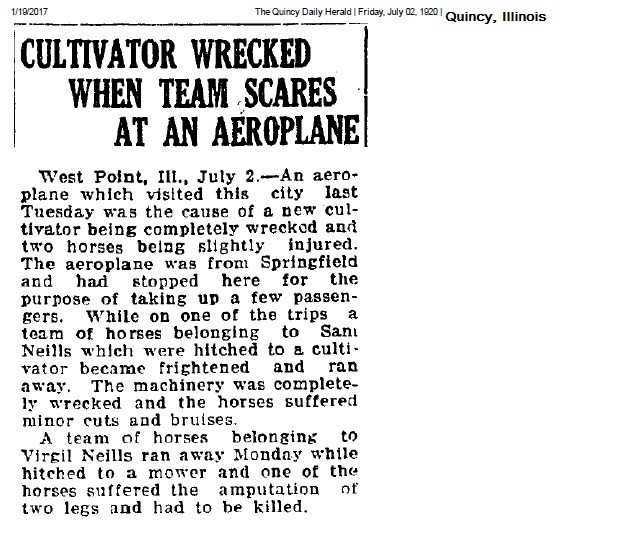 New technology frequently causes problems as it did for Samuel Neill in 1920.

An airplane flying near West Point, Illinois, spooked the two horses who were pulling his cultivator. The horses ran off, pulling the cultivator behind them and destroying it in the process. In an apparent separate incident, two horses belonging to Virgil Neill ran off while hitched to a mower. One of the horses was injured and had to be put down.

There is more to be learned here than that the Neills had horses who were easily spooked.

I had to do a little digging in my files to determine which Samuel Neill the article referenced. There were potentially several and I did not want to immediately assume the incorrect one.

The article does not mention that Virgil is the son of Samuel. That’s another instance of a newspaper not mentioning the obvious. Most individuals who knew the family already knew that Virgil was Samuel’s son. Newspapers are called newspapers for a reason.

Sometimes newspapers or other references may mention two separate incidents that have absolutely nothing to do with each other. That’s the case here. These items have in common the Neills and their horses. That’s it. One event did not cause the other. One needs to be careful to not draw inferences where those inferences are not supported.