It is easy to see how the the last entry on this census page was transcribed in Ancestry.com‘s “Colorado State Census, 1885” as N. L. Albers instead of U.L. Albers. Initial upper case letters in first names can be difficult enough to transcribe sometimes 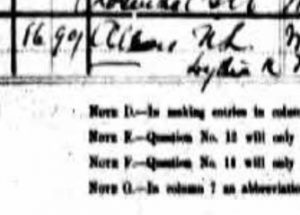 when the rest of the name is there to provide a context. The difficulty is significantly worse when initials are all that are used. It can be problematic for a transcriber, unfamiliar with the family, to correctly interpret the initials.

The problem is somewhat compounded in this case as the man, Ulfert Lubben Albers, used his initials quite a bit of his life. So did his father, Lubbe Ulfert Albers. And several other close relatives who were either named Ulfert Lubben Albers or Lubbe Ulfert Albers. It makes keeping them separate even more of a challenge than if they had used their full names. It was not uncommon for those with Germanic names to use initials during this time period. Sometimes it was done to reduce confusion when dealing with those who were not familiar with German names and sometimes it was done mask German heritage.

There are several blanks on this census page in columns for places of birth of the individual and their parents. It is presumed that this indicated the information was unknown. Referencing the enumerator’s instructions would answer this question. In some families the places of birth for children living in the household are not known. Before one wonders what was going on in the mind of the person who answered the question, it is worth remembering that a parent might not have answered the questions. An older sibling might have and may not have known where all of their younger siblings were born. And it is always possible that a neighbor answered the questions. It is not just the Albers family that has blanks. The use of them in the Albers enumeration is not unusual. Many families have similar entries.

This enumeration serves as a good reminder to check those “off-census” years for enumerations that were federal enumerations, but that were only taken in specific states. They can be especially helpful around the 1890 time period.