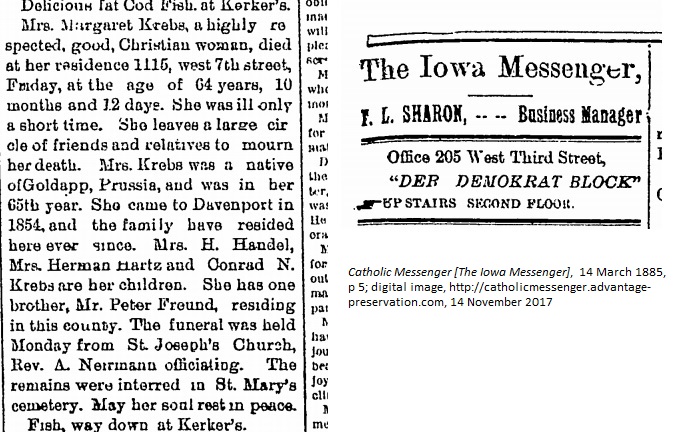 This image is a compilation of two images from page five of the 14 March 1885 of “The Iowa Messenger.”

Religious newspapers can provide details on individuals not given in other publications. They can be easily overlooked by researchers, particularly if they are not easy to locate or if researchers only focus on traditional newspapers. As more and more newspapers generally become available in digital format online, access is even easier.

This 1885 obituary for Mrs. Margaret Krebs in The Iowa Messenger (also known as the Catholic Messenger) contains significant information on her. It may be that non-religious newspapers contain fewer details on Margaret.

Margaret died at her Davenport, Iowa, residence (1115 West 7th Street) on “Friday” at the age of 64 years, 10 months, and 12 days. While the death date is not given, it is assumed that the Friday was the Friday before the newspaper was published. Mrs. Krebs was a native of Goldapp[sic], Prussia, and had lived in Davenport since 1854.

She was survived by her children, Mrs. H. Handel, Mrs. Harman Hartz, and Conrad N. Krebs; and her brother, Peter Freund. The notice indicated that Peter lived in “this county” (Scott County, Iowa), but does not indicate where her children were living at the time of her death. Margaret was buried in St. Mary’s Cemetery.

The information on Margaret’s survivors would be considered primary. Unfortunately there is no way of knowing if the “H” in “Mrs. H. Handel” is a reference to a man or a woman. Margaret’s husband is not listed and the reference to her as “Mrs. Margaret Krebs” suggests he is out of the picture and probably deceased.

Based solely upon this obituary it cannot conclusively stated that Margaret’s maiden name was Freund. Peter Freund and Margaret could easily have only shared a mother and her maiden name could have been something other than Freund.

Like many newspapers during this time period, advertisements are scattered throughout. The “fish at Kerker’s” has nothing to do with Margaret.

These newspapers are online at http://catholicmessenger.advantage-preservation.com.

The site includes the following newspapers: