After three decades of looking, I may have the name of the parents of my oft-married ancestor, Barbara (Siefert) Bieger Fennan Haase Haase. Barbara was born about 1825 in Germany and died in 1903 in Warsaw, Hancock County, Illinois.

The name of her parents appear in a state copy of her marriage record from 1882 in Ft. Madison, Lee County, Iowa. Years ago, I had the records searched and the local records gave me the date and marriage officiant, but I was told that no return (with parents’ names) was extant. I assumed (incorrectly) that the state copy of the record would not have the parental names. It did: Frederich and Maria Barbara Siefert. 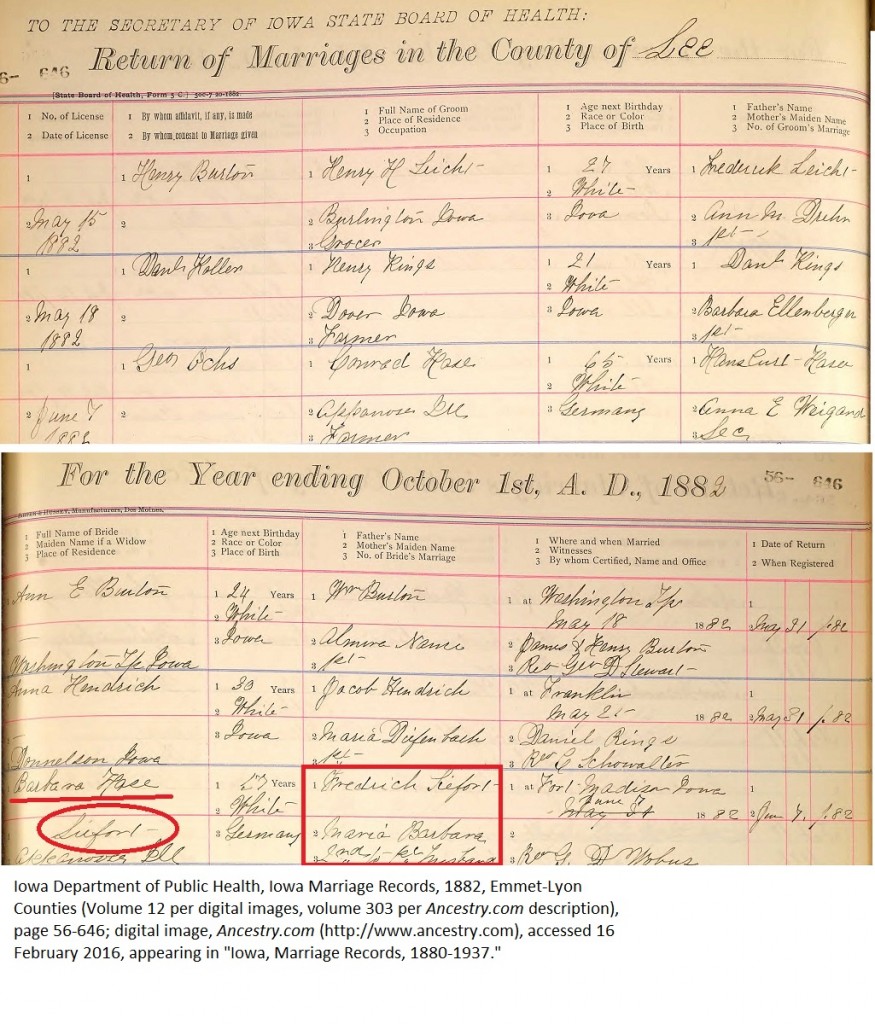 The immediate lessons here are:

I decided to take another look at the 1882 marriage when I remembered that Ancestry.com had put the state copies of the marriage records on their website. 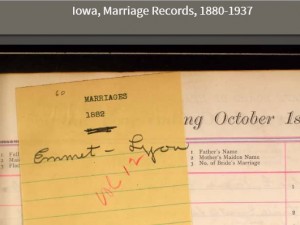 Whoever created the digital images of the records used by Ancestry.com did not make an image of the spine of the book. However, when I went to the early images on the “roll” for the volume I was using, I noticed a yellow card with “Marriages 1882 Emmet-Lyon Vol 12” written on it. This seemed to indicate that the volume number of the entry I was using.

The record at Ancestry.com indicated a different volume number: 308. The math teacher in me wants to say it is a different number base. The realistic genealogist in me is thinking that the larger number is perhaps sequential for all volumes and the smaller number has another meaning. At this point, I used both numbers indicating from where they came. 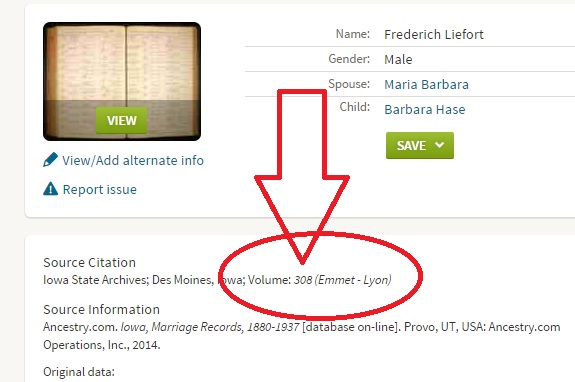 The real question is where my research should go next. I’m still working on that. However, here’s a quick summary of what I know about Barbara and the “early part” of her life.

She was born about 1825 in Germany, perhaps in the general vicinity of Darmstadt. She married in 1849 to fellow German immigrant Peter Bieger in Cincinnati, Hamilton County, Ohio. They came to Hancock County, Illinois, by November of 1850 and Barbara remained that county until her death.

There’s no reason to doubt the veracity of the names she provided for her parents on this 1882 marriage record. Barbara would likely have had first hand knowledge of her parents’ names.  Her obituary indicated that she came to the United States as “a young girl,” suggesting she immigrated with her parents. That obituary reference could easily have been incorrect and based upon a misconception held by one of Barbara’s children who were the likely obituary informants.

Before I start typing Frederick Siefert in every search box I can find, I’m going to stop, pause, and reflect, for just a little bit.

It’s taken me thirty years to find Frederick and Maria Barbara’s names. I can take at least thirty minutes to analyze what I have before I start searching for them.