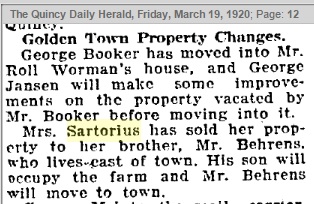 It can be frustrating when a document or record provides fewer identifying details of individuals than we would like, particularly in newspapers.

Sometimes it’s a matter of space and certain identifying details make the item too large to fit in the allotted space. Sometimes, particularly for death notices and obituaries, there may be a per-word charge that effects how many words can be used in an item.

But there is often another reason why extraneous details are not given in a newspaper story: they are not needed to identify the individual.

The illustration in this post, under the section “Golden Town Property Changes” indicated that “Mrs. Sartorius had sold her property to her brother, Mr. Behrens, who lives-east of town. His son will occupy the farm and Mr. Behrens will move to town.”

Because it’s the small town of Golden, Illinois–there’s only one Mrs. Sartorius whose brother is Mr. Behrens. And given that, they’ll likely know who his son is as well. Anyone contemporary reading the reference will likely know exactly to whom the article is referring even if first names are not used. The references as printed are sufficient to the 1920-era reader and using the first names would probably have made the item take up one more line of type-an additional concern.

The Quincy Daily Herald in 1920 was not getting any money from those who currently use the newspaper today. They were under no obligation to leave behind a detailed record so that someone in 100 years would be able to learn things about their forebears.

Always keep in mind the original purpose of any record that we use.

And while you may miss the data when someone is simply listed as Miss Jones, remember that when the reference was published most people already knew who Miss Jones was.

The purpose of a newspaper is not to print things that everyone already knows. They are called newspapers for  reason.