I’m working on the parents of a Joseph Daby of Stow, Massachusetts, who died by 15 June 1767 when his will was admitted to probate in Middlesex County, Massachusetts. He’s the father of Mary (Daby) Puffer Brown, my ancestress. Work on Mary is incomplete, particularly after her second husband Amos Brown died in 1766, but the connection of her to Joseph (died 1767) is solid enough that I decided to work on him, partly in hopes that something may turn up on her.

A little more about Abigail Daby–the daughter of Cornet Joseph and Elizabeth.

Cornet Joseph Daby’s will from Middlesex County, (written in January of 1734/1735 and admitted to probate two months later) indicated he had only one child: Abigail. His will uses the phrase “only child Abigail” twice and does not mention any other children, grandchildren, etc. He does mention his wife Elizabeth, a brother-in-law (surnamed Plimpton), and a nephew Joseph Daby. The Joseph Daby purported to be the son of the will writing Joseph was alive at the time this will was written and it seems highly unusual for the phrase “only child” to be used if there were other children. Even if the will writing Joseph had meant to disinherit children, the typical practice would to have been to mention them and indicate they were to receive nothing or to give them a token bequest.

Abigail’s request for her brother Joseph Clark to be appointed her guardian on 23 January 1746/1747 also indicated that she was Cornent Joseph Daby’s only child. 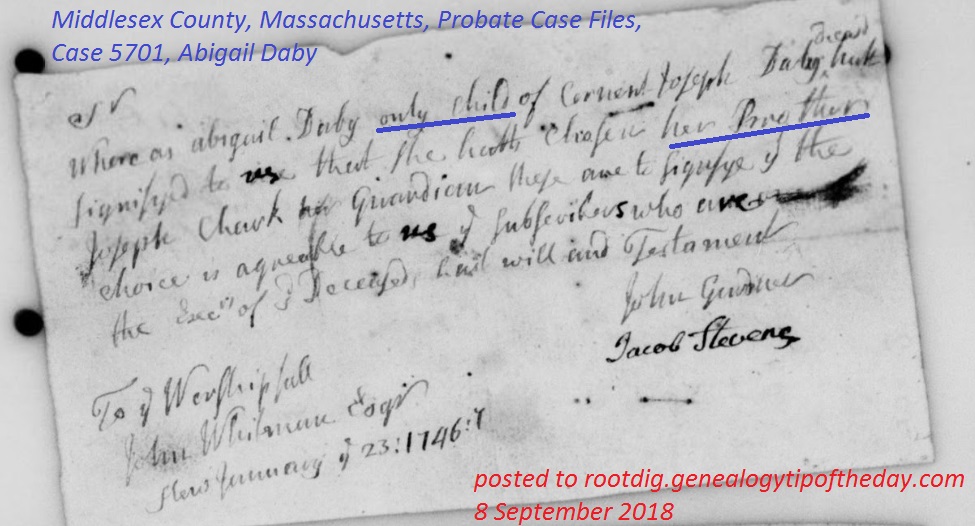 Based on the evidence I’ve found, it seems safe to conclude that Cornet Joseph had one daughter and was not the father of the Joseph who died in 1767.

There are quite a few entries for these Dabies in FamilySearch. For now, I’ve decided to focus on the vital records for the area, the probate records, and the land records that can be located and see what conclusions they allow me to reach.

And sometimes it’s good to use FindAGrave for the stones and just the stones.