Some sites broadcast their updates from hither and yon and a genealogist would have to have their head under the proverbial basket to not know that new data had been added.

Other sites are less public about their updates.

The “Newspaper Archive” of Quincy, Illinois, newspapers hosted at the Quincy, Illinois Library’s website is one of those sites that is less public. They’ve extended their digital newspaper offerings to through part of the 1920s where I discovered this little gem about my great-great-grandmother, Nancy Rampley. 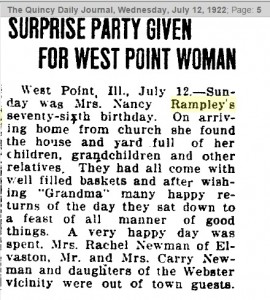 According to the calendar, the Sunday before 12 July was 9 July. Based upon other records on Nancy Rampley (including her death certificate, obituary, tombstone, and Civil War widow’s pension), she was born on 8 July 1846–not 9 July. The announcement in the paper could easily have gotten the day of the party mixed up with her actual birthday.

Another lesson here is to celebrate while you can. Nancy died the following spring and did not live to see her 77th birthday.