I discovered this item quite by accident while giving a webinar on using newspapers on the Library of Congress website. 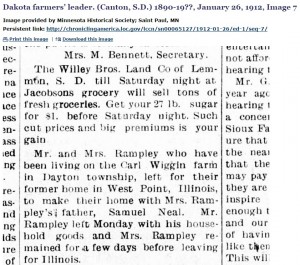 The Rampleys are leaving Canton, South Dakota, in 1912.

The January 1912 reference in the Dakota Farmers’ Leader of Canton, South Dakota, indicated that my uncle and aunt, Louis and Mary (Neill) Rampley, were leaving South Dakota and returning home to Illinois.  The article stated that Mr. Rampley was heading home first with the household goods and that Mrs. Rampley was going to head home a few days later. Leaving South Dakota in the middle of winter in 1912 seems like a less than pleasant trip.

There is even mention that the Rampleys are going to make their home with Mrs. Rampley’s father, Samuel Neal[sic]. His being named in the article strikes me as odd as he had no apparent connection to Canton, South Dakota, other than his daughter living there.

I already knew that the Rampleys spent some time in South Dakota before I located this reference as they had at least one child who was born in South Dakota. I did not know when they returned to Illinois until this item was located. One would hope that this newspaper item would be providing primary information about the Rampleys departure and that it was accurate. Of course whether or not the information was primary and accurate would depend upon who wrote this “gossip column” and how they came to know the information. At this point, I have no reason to doubt it’s veracity.

What I find more interesting is the timing of the Rampley’s departure–and not the fact that they we leaving South Dakota in the middle of winter.

The timing of the Rampleys departure is interesting given where they are going to live and the timing of their departure. Samuel Neill died in March of 1912 and one has to wonder if his demise was imminent at the time the Rampleys moved back to Illinois and whether it was the reason for their move during the winter.

It’s always about chronology and context. People do not live in vacuums.

It’s also about the extended kin network and understanding all the relationships that exist between individuals.