I’m still trying to locate information on a “Harm Habbus” who apparently was in Clayton Township, Adams County, Illinois, in 1872 or so.

This is part of an 1892 newspaper clipping from the Quincy [Illinois] Daily Journal that references Habbus as the father of a baby born to Volke Behrens, daughter of Ulfert Behrens in Clayton Township. 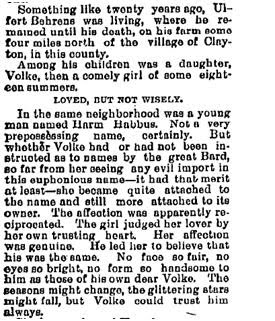 Based upon the name and ethnic community where the Behrens family lived, I’m guessing Harm was a native of Ostfriesland, Germany.

The newspaper article regarding the court case is somewhat dramatic, referring to Volke as a “comely girl of some eighteen summers” when she met Harm.

The article goes on “not a very prepossessing name, certainly. But whether Volke had or had not been instructed as to names by the great Bard…she became quite attached to the name and still more attached to its owner. The affection was apparently reciprocated. The girl judged her lover by her own trusting heart. Her affection was genuine. He led her to believe that his was the same. No face so fair, no eyes so bright, no form so handsome to him as those of his own dear Volke. The seasons might change, the glittering stars might fall, but Volke could trust him always.”

The author certainly had a flair for romantic writing.

The Behrens-Habbus romance faded and Volke’s parents ended up raising the child she had with Habbus.

There’s a reason mention of the romance ended up in the Quincy newspaper and we’ll save that for a future post. One never knows what one will come across when viewing old newspapers.