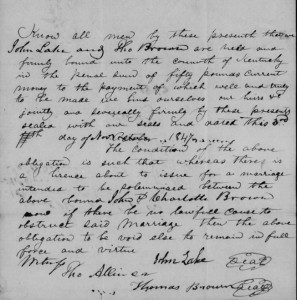 In 1847 Thomas Brown signs a marriage bond for the marriage of John Lake and Charlotte Brown in Mercer County, Kentucky.

On 29 November 1850 Thomas Brown signs a statement in a War of 1812 pension claim. This Thomas Brown states that he is 53 years of age and is a resident of Mercer County, Kentucky.

The question: are these two men the same Thomas Brown?

And so one looks at the signatures of the two Thomas Browns. One cannot always expect signatures to look like carbon copies of each other, especially when time has elapsed. But there is no doubt the signatures are similar, but it’s clear that the 1850 one has been written by someone whose hand was not as steady as the person who made the signature in 1847. 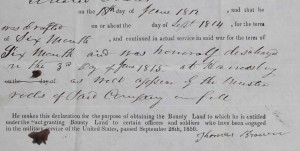 Statement made in War of 1812 Pension Claim by Thomas Brown of Mercer County, Kentucky in 1850.

There are similarities between the two signatures. Aside from the “steadiness” in the 1847 signature that is somewhat lacking in the 1850 signature, the “T” in Thomas has been made slightly differently. Are the signatures “close enough” to say that the two are the same man?

A search of the 1850 census and contemporary tax lists may help to determine how many Thomas Browns were in Mercer County, Kentucky during the period of interest. A complete review of Thomas Brown’s pension application may also contain information on him which may impact the view of whether these two men could be the same person or not.