Genealogy is not a video game where the action figures are already dead. You can quote me on that.

I don’t really use the trees on Ancestry.com the way they are intended to be used. I rarely use anything the way it is supposed to be good, so I’m acting in a consistent fashion. However I do have a couple of private trees  on Ancestry.com for my own personal use, usually to see if Ancestry.com stumbles upon something that I do not already have. I am usually disappointed.

Any images or records I locate are downloaded to my own computer or media and are integrated into my own database which is kept offline (except for the making of regular backups). That’s easier for a variety of reasons, including: not being reliant on having an internet connection to research or view my data and images, not being reliant on memberships should I let one lapse, and having access to the information if a service to which I subscribe no longer provides access to a part of it’s data because of a change in their contractual arrangements.

But sometimes the “automatic” search process at Ancestry.com finds things.

But not on Benjamin Butler. Nothing. Not one leaf on Benjamin’s branch of the tree. Every one of my paternal grandmother’s known ancestors gets a leaf. Not Benjamin.

Poor Benjamin is left without a leaf.

While I am frustrated, I’m not certain if Benjamin should be jealous or not. The leaves on my grandmother, her parents, and her grandparents are to records (generally marriage and census) that I’ve already found, but that are not “linked” to that person in my database. Most of the other leaves, especially for the Trautvetter and Bieger families, are to census records or “family trees” that originated from data I compiled in the (drum roll…1980s) and shared with others. There’s nothing new on any of those people in those trees–except for the tree on Barbara Siefert that has her marrying before she was born and having children after she died (or something equally inane–when the dates and places started violating the laws of physics, common sense, and common decency, I clicked away from the tree). For the most part, I’m the only one actively researching the Trautvetter/Bieger families and the compiled trees reflect that.
So…I’m not certain that Benjamin should be jealous that he has no leaves. But I still wish he had some. 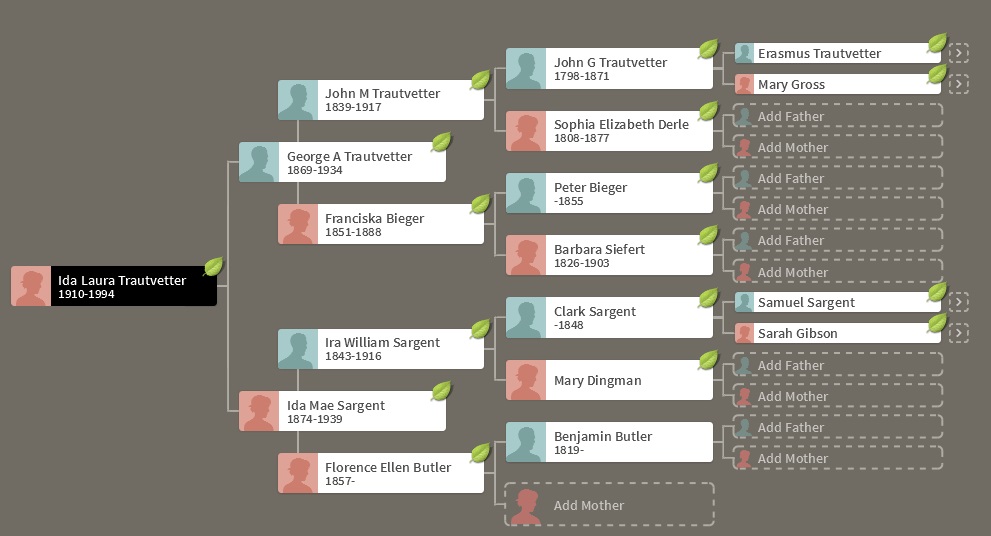 To make it easier for Ancestry.com to give hints on Benjamin, I linked to his three known census enumerations:

I wanted Ancestry.com to have more on Benjamin that an approximate year of birth and a rough place of birth. Not one leaf on Benjamin even after I tried to fertilize my tree with some information.

I’m going to have to keep working on Benjamin the old-fashioned away. The TV shows and commercials want us to think that genealogy research is a video game where the people are already dead.