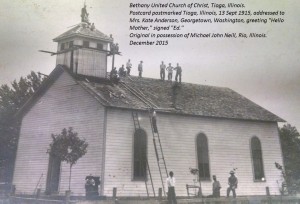 You don’t have to buy anything on Ebay to get genealogical use out of it. However using Ebay for genealogical research is more than searching and copying whatever images you can from the site before they disappear.

Daily there are thousands of images of items on the site, particularly postcards and old photographs that could be helpful in your research. If nothing else they give you a new perspective on a location or a time period. Occasionally there are private family letters or old Bibles on the site as well.

The problem is that the web page promoting the item does not stay up forever. You will have to harvest the images and information from Ebay when you find it. Within a short time after the sale the page is gone–and so are any images that were used to promote the item.

The Image of the Item

You didn’t take the picture of the item used on the site, so you don’t have copyright to that image. The photographer (usually the seller) does. It doesn’t matter if the photograph looks it was taken by less than an amateur–the photographer still has copyright. Whether or not they care if you use the picture is another matter entirely. Sellers won’t often respond to requests for use of the photograph either. If you attempted to get permission, document that attempt.

That’s a separate issue from the original copyright on the photograph or the postcard itself–that copyright depends upon when the original item was published. Postcards usually are considered to have been published and if old enough are in the public domain. The postcard used in this post was postmarked in 1915–meaning that it was published at the latest in 1915. It’s copyright has expired. Unpublished photographs are subject to different policies.

Of course, what you do with the images on your own computer without publishing is between you and the voices in your head. It’s when you publish the images that potential issues could arise.

From a practical standpoint it is doubtful that anyone will care if you publish a photograph of your great-grandparents taken in 1915, but you never know.

In this post, we’ve just looked at pictures–we’ll save other items for a future posting along with a discussion of citations for items that were located on Ebay but were not purchased. It’s easier to cite what you have.