They were always referred to collectively as “the 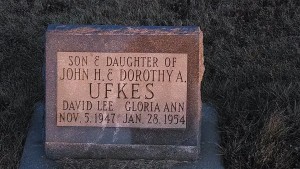 I don’t remember when I first became aware that Mom had two siblings who died at birth. Their grave went unmarked for nearly thirty years in a plot adjacent to my grandparents. A part of me thinks I always knew about “the babies” and another part of me thinks I really was not aware of them until I was in high school. It may be that I’m confusing my memory of their existence with my memory of their names.

The few times they were mentioned, they were referred to as “the babies.” Never by name–which probably just made it all the more real. It was the longest time before I could really even remember their names which I originally discovered in the old 1950-era Ufkes genealogy.  It was not until my oldest daughter was twenty-four that I even realized that (except for an “e” at the end) that Gloria’s middle name is the same as that of my own daughter. My own mother was nearing six and nearly twelve when they were born. She would have been aware of Grandma’s pregnancy and the eventual outcome. No one ever said, ever, that Gloria was born just three weeks after Grandma’s mother died of cancer in January of 1954.

Whenever the babies were mentioned, it was never initiated by me. Never. Despite being  aware of it in my early teens when I started my genealogy research, not being a parent myself, and never having experienced the death of a close family member, I knew this was a topic that I was not to bring up. Period. And so I didn’t. When it was mentioned (which was rare), I simply listened and did not ask questions.

The only one who mentioned the babies was my mother and it was not  often. If my grandparents ever mentioned them (which I find highly doubtful), I have no memory of it.  And I knew better than to ask my Grandmother about something of which my own Mother rarely spoke. There were unwritten rules and that was one of them.

Some things are simply difficult. There’s no other word.

There was actually only one veiled reference to the babies in my Grandparents’ presence that I remember. It was when my own daughter was born in the early 1990s. My mother, grandparents, and my in-laws had come to the hospital for the delivery. While there were no complications, things were not quite progressing as quickly as originally hoped. I came out to the waiting room at one point and my grandparents were gone. Mom said that Granddad had said Grandma “needed some air.” Her face and her tone had that “you know what I’m talking about Michael don’t ask any questions look” to it and I knew exactly to what she was referring.

It’s allowed not to ask family about somethings. People are allowed their emotions and allowed to handle things in their own way.

There is one thing…

I wish I knew where they got the names.