One of the challenges of using microfilmed images is that a sense of perspective has been stripped away. The clues of color and the unwritten and undigitized contextual clues one has when one holds the actual paper are gone. The problems are not so bad when the digital images are of bound books or individual certificates. The problem is compounded when the records being filmed are loose papers that have been stuffed into a packet. Those papers may have been used several times, ending up woefully out of order. Sometimes documents that have been attached to other documents have come apart.

Such is the case with one of the sets of probate records for Herman Sartorius who died in the 1880s in Adams County, Illinois. These records are from the case file approving the sale of his real estate. Two “sets” of images where the front and back have been filmed are shown.

At first I was slightly unclear that these two items were originally part of one document. It’s a little easier to see when the images are one on top of the other. That’s not how they appeared on the original microfilm or digital set of images. The top image was on the left of the one on the bottom. 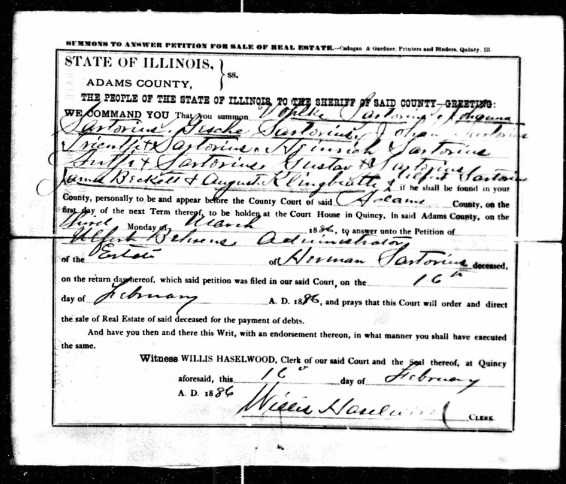 Putting the individual images right side up helped. That made it easy to confirm that the last two images were the front and back of a summons to appear in the Adams County Court. The summons was dated 16 February 1886. The reverse of the summons had the “cover page” information, which indicated the fees and the date the executed summons was filed–it’s still sideways in the image that follows. The top of the image was what confused me at first. Then I realized that it had been attached to the original summons and that part of it had become torn off. That torn off piece of the summons is the first image in this post. 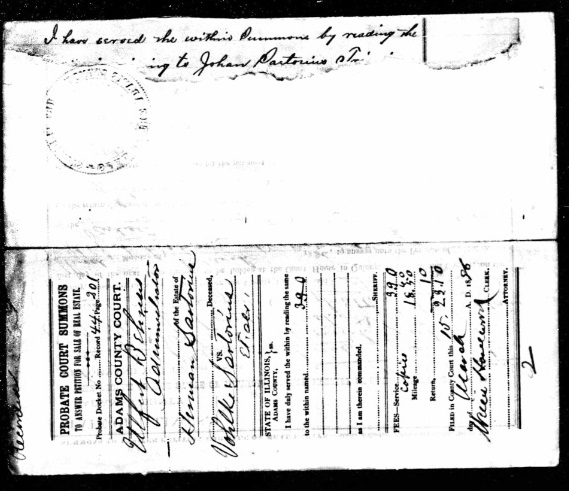 Using an image manipulation program, I was (very unprofessionally) able to “fit” together and see that the loose piece of paper had been attached to the summons. It was the certification by a deputy sheriff that the summons had been served on the Sartorius family members on 26 February 1886. 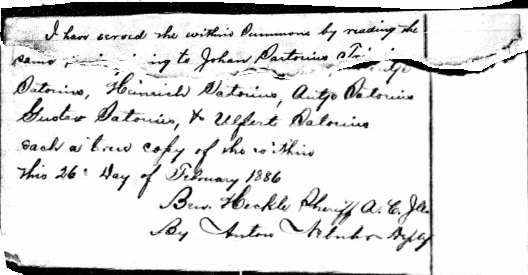 Microfilmed images of records often do not indicate what is the front and back of the same document and what may have been attached at one point. Sometimes it takes a little patience to see just how everything fits together.

Failing to see how images from a case file fit together to make records can create more confusion than necessary. Make certain you know which images create which record from a case file of papers.

These documents are from a case file titled “Estate of Herman Sartorius Deceased Petition to Sell Real Estate to Sell Debts.” The casefile box number is 67, which seems a little low. The digital image of the records at Ancestry.com was made from Family History Library microfilm roll 933899. The petition to sell the real estate was dated 16 February 1886 and was to be heard at the March 1886 term of the County Court of Adams County.

These images from from the probate collection at Ancestry.com. You can link to individual collections here.