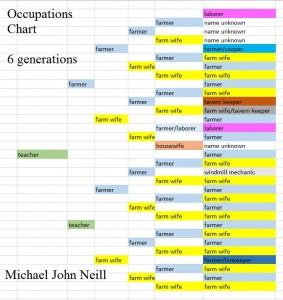 Ancestor Archaeology posted an occupations chart to complement the other colorful charts that have been floating around cyber genealogy land.

I knew what mine was going to look like before I even started. With the exception of a third-great-grandmother who ran a tavern for a time in the 1850s, my mother was the first person to have a “non-farm” job. Similarly my male ancestors are all farmers until my ggg-grandparent generation where I have a tavern keeper, windmill mechanic, and part time cooper thrown in the mix. I don’t have any “town dwellers” in my ancestry until my ggg-grandparents’ generation. Even then, it’s the distinct minority and my background is decidedly rural.

It is worth remembering that in some languages there may be several words that translate to one broader, more generic, occupation. The variations may imply social status, general economic standing, etc. While it’s a good study, it will have to wait.

I chose to use “farm wife” for those female ancestors whose husbands were farmers as I feel that is a more accurate description. I also did not guess at occupations where I did not have names.

My birthplace chart is more varied than this one.

That’s a good reminder that our ancestors may be homogeneous in some ways and not in others. Any one chart has limitations.