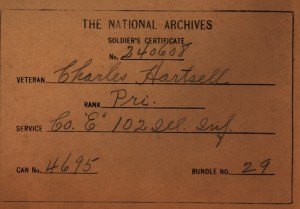 The Civil War pension file for Charles Hartsell, contained at the National Archives, has arrived. We’ve already mentioned a few items from select documents from this set of papers.

Hartsell was the son-in-law of Massachusetts native Andrew Trask–born in that state around 1814. Andrew is the actual person of interest. Unfortunately a relatively careful reading of the file did not locate any clues (direct or otherwise) that relate to Andrew. From the file, I will be able to obtain information on:

Mentioning his health three times is not a typographical error. It was done to emphasize the proportion of the file devoted to his illnesses and injuries (he was shot) during the war and his health after the war.

Charles’ wife predeceased him. Since there was no widow’s claim, the bulk of the documentary information in the file relates to Charles’ service and medical history. The only information on his wife and children is contained in the surveys that were sent to men on the pension roll in 1893 and 1913.

Those surveys were not done to gather genealogical information. They were compiled so that if the widow survived, her claim information could be compared to what the soldier put on the survey.

There are a few items in the file that are interesting or make some good genealogical points. But there was not anything in the file to answer my actual question and I was aware that the chance was slim when I ordered the file.

But you don’t know if you do not look.

A colleague graciously gave me some ideas on searching for Massachusetts native Andrew Trask. Unfortunately his suggestions focused on records that are not available online. Fortunately they should be on microfilm, but that will have to wait until I get to the Family History Library in May.