Beginning in roughly the middle of the 19th century, a variety of publishing firms began publishing what are commonly referred to as “plat books.” These books show the sizes, shapes, and acreages of farm properties along with the name of the owner. Typically drawn from information contained in property tax and real estate records, modern copies of these books are usually a well-worn reference in many farm households across the United States.

Older ones don’t just include maps of farms. They can often include 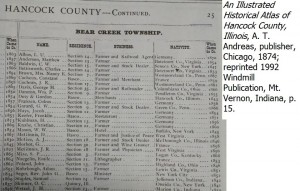 a variety of other reference material. Sometimes that material was added to sell books or to raise money from selling the privilege of having a picture (of a farm, house, or your ancestor’s own visage) published in the books. Sometimes these books contained directory-type information, particularly in those rural areas where directories were not common.

Sometimes those whose ancestors were not farmers avoid using “plat books,” often referred to as atlases. That can be a mistake. The 1874 Hancock County, Illinois, “atlas,” includes:

Some of the subscribers are not farmers or landowners, but are local businessmen. There are pictures of homes and churches pictured from towns around the county.

The “atlas” just isn’t about showing a map of who owns what piece of farmland. Although locating your ancestor’s name on a map of a specific township can be the starting point to land and other records. 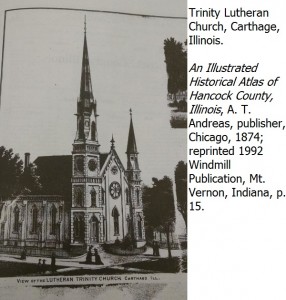 You may not find your town dweller mentioned specifically in one of these books. But you may find a picture of his church, places where he shopped, or the local courthouse.