I’ve heard genealogists mention the importance of not relying on the indexes created in record books. I believed in it, but largely because of names being spelled incorrectly–not because I had ever actually seen a record recorded and omitted from the index. I had heard of the theoretical record being in the record book, but not being indexed, but was convinced that it was something some professional researchers made up just to chastise the uninformed.

That’s not the case any more.

The only way I found the marriage record of George Rothweiler and Wilhelmina Trautvetter was by performing a manual search of the marriage book.

The first image in this blog post is from the groom’s index (the “R” section) of volume 5 of St. Louis marriages which includes the 1850-1851 ear. There is only one entry on page 417 beginning with the letter R. The entry is for the marriage of Philipp Rick and Margaretha Morhing. The “index” lists all the “R” entries in page order–keep in mind that this index was created as the records were being created in the 1850s. 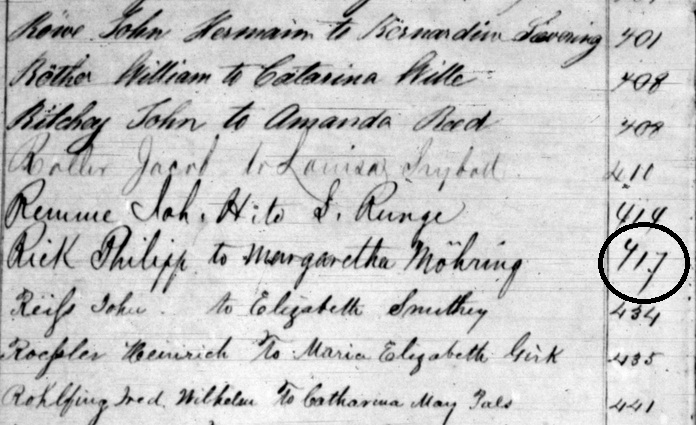 According to this index, there is no marriage for George Rothweiler in volume 5 of St. Louis marriage records. There is no bride’s index in the front of the actual marriage register in which to look for Wilhelmina.

And yet, at the very top of page 417 squeezed into the top of the page is the entry for George Rothweiler and Wilhelmina Trautvetter as shown below (click on the image for a larger view).

The screen shot below contains the entry for the marriage which appears in the “St. Louis, Missouri Marriages, 1804-76” database on Ancestry.com. This index was created by the St. Louis Genealogical Society who apparently, unlike the clerk, read all the marriage entries. I had searched this database before, but my list of variants did not catch this combination.  I wasn’t looking for Trautvetter as the last name and had included what I thought was the bride’s last name (Hess) in all my searches. I’ll have to tweak my variant list. 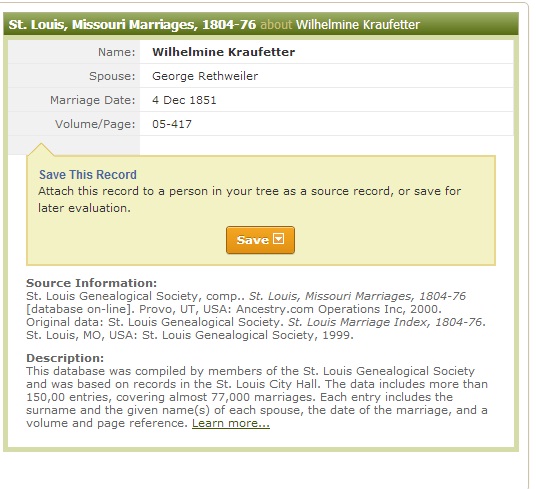 I also have more research to do. Trautvetter was the maiden name of Wilhelmina’s mother, Ernestine (Trautvetter) Hess. Ernestine’s maiden name is documented in the Hancock County, Illinois, probate files for her brother, Michael. It’s there she is styled as Ernestine Hess–and Wilhelmina Rothweiler is listed as her daughter.

But according to this marriage record there is a little more to the story than I thought.