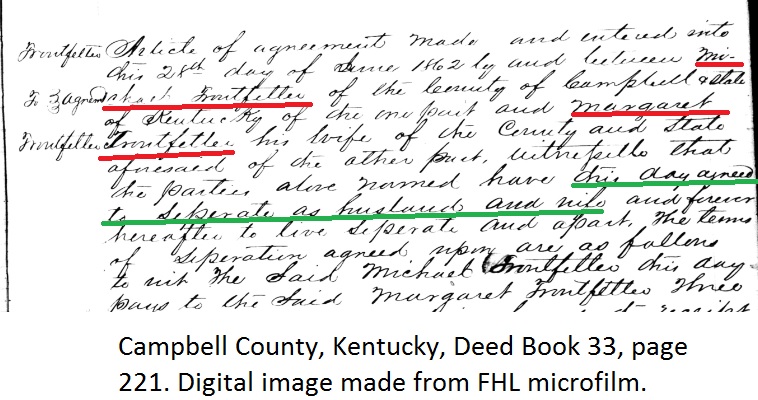 Deed records are not always just about the land. There’s often something that precipitates the creation of a deed. The owners want to move or may need the cash. The owners may be transferring property before their death in order to avoid probate. The surviving spouse may have died and the property needs to be transferred by the heirs to one of them or out of the family. The transaction may have been the result of a tax sale or court action. Frequently the real cause is not spelled out in the document–court action being the major exception. All we have left is the record copy of the deed detailing the transaction.

We often do not know if the cause was benign or dramatic.

The reasons are not really germane to the record after all. The deed only needs to confirm that the grantor is assigning his (or her) title to the real property to someone else.

Michael and Margaret Trautvetter were separating and no longer going to be living as husband and wife. And there were property rights to be concerned with.

In return Margaret gave up her dower in all the real estate Michael owned and in all rights to his estate.

But they weren’t getting divorced. They had decided to “separate as husband and wife.” Margaret agreed to move off the premises that day and give him “peaceable and quiet possession of same.”

They also agreed that if either of them filed for divorce that the other one would not contest it. The separation agreement for the Trautvetters is filed in Campbell County, Kentucky, Deed Book 33, page 221.

At this point it is not known whether or not the Trautvetters actually divorced. No children were mentioned in the agreement, but that’s not surprising as Michael did not leave any descendants.

Michael is known to have lived in St. Louis, Missouri, with a niece a few years later. He eventually moved to Hancock County, Illinois, where he died in 1869. That’s also where his estate was settled and where most of his siblings and his nieces and nephews lived. That estate mentions no wife.

Land records are not always about the land.

In fact many times the land is tangential to the real issues at hand.