In 1918 my uncle was apparently in search of a district manager from Lee County, Illinois.

The job: selling and demonstrating “magnetic health garments.” They apparently cured a variety of things. 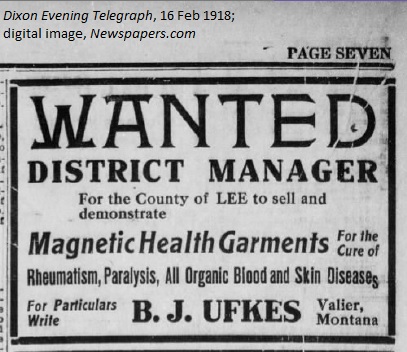 The advertisement does provide evidence that Bertus J. Ufkes lived in Valier, Montana, in early 1918. Bertus was living in Montana and Idaho during the pre-World War I time frame and, given the uncommon nature of the name, this pretty much has to be the same guy.  I’m not certain that any of the records I have indicate a Valier residence.

I’m very certain that this is the first reference I have to him involved in this occupation.

I avoided a Google Search for “magnetic health garments.” Some questions are better left unanswered.