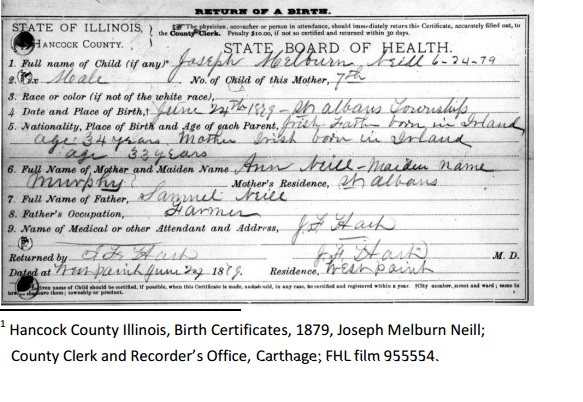 Most documents refer to him as Joseph M. Neill and until I located his 1879 birth record, I had assumed that his Irish parents had named him Joseph Michael Neill. It seemed pretty logical to me. I never entered his name in any database as Joseph Michael Neill as I’m not in the habit of making up names for people. In fact I never typed it anywhere. But in the back of my head, he was always James Michael. Maybe it was because on some level I was looking for another Michael Neill in the family because myself.

This man was not going to be my long lost partial namesake. I was wrong. The “M” was not for Michael, it was for Melburn.

And I’m no closer today to knowing where his parents, Samuel and Annie (Murphy) Neill, got the middle name for their seventh child born near West Point, Hancock County, Illinois, in 1879 than I was when I located the record several years ago.

There are a variety of places the name could have originated–his father’ family, his mother’s family, a famous person, a location, thin air, etc. Joseph is the only known person with the middle name of Melburn in the immediate family. It was not, to the best of my knowledge, passed down to other members of the family.

Knowledge of others members of the Neill family is sketchy and certainly not enough to draw any conclusions about the name or my inability to find it thus far. I only have the names of four of Joseph’s first cousins on his father’s side. None of those children have the name Melburn (their names include Joseph, Mary Jane, James, and Sarah Anne). Joseph’s siblings are named: John, Samuel Edward, William, Edward, Charles Thomas, Mary Jane, and Sarah).

Now that I look at their names I realize that I have not really looked to determine if the other siblings of Joseph M. had middle names or not. My research to this point had focused on establishing their dates of birth, marriage, and death, combined with an attempt to locate the Irish origins of the family.

Maybe it’s time to take a closer look and see if I can find middle names of Joseph Melburn Neill’s siblings. While the chance is slight that a middle name of a sibling will explain the Melburn, it is possible that another middle name will answer other questions I have about the family.