Revolutionary widow Eleanor Fugate of Scott County, Kentucky, received a military land warrant for 160 acres in 1856 based upon the military service of her late her husband, Randall Fugate. We’ve mentioned Eleanor in earlier posts because she was significantly younger than her husband–approximately twenty years–and not of an age where one automatically assumes the woman could be a Revolutionary widow.

Such assumptions are bad ones to make as widow’s applications can contain significant genealogical details. 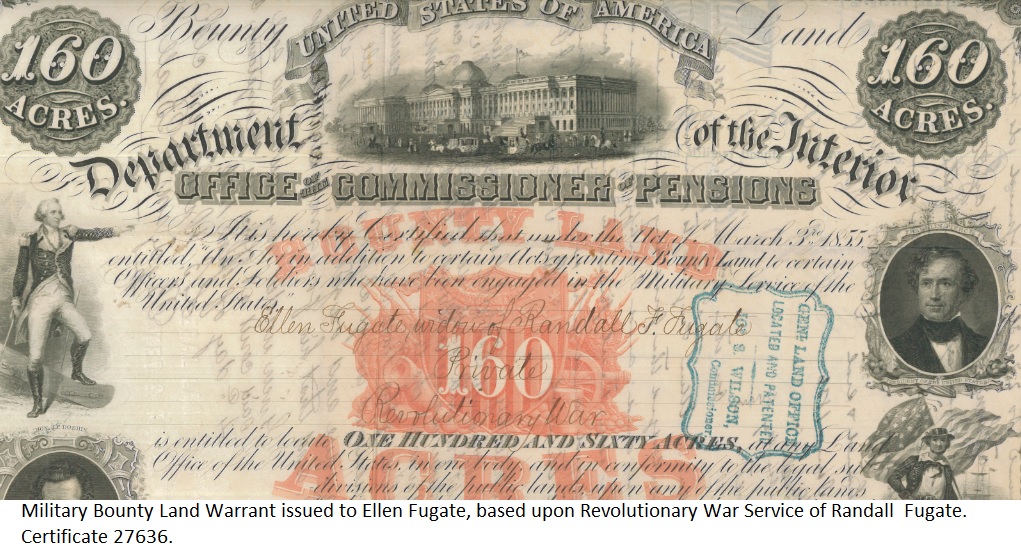 The reverse of Eleanor’s warrant contains her signature when she assigns the warrant. Assigned warrants such as this one are excellent places to potentially obtain actual signatures for women during this time period. Fortunately Eleanor actually signed her name instead of just making her mark. There’s even a caveat here about transcribing documents as well. 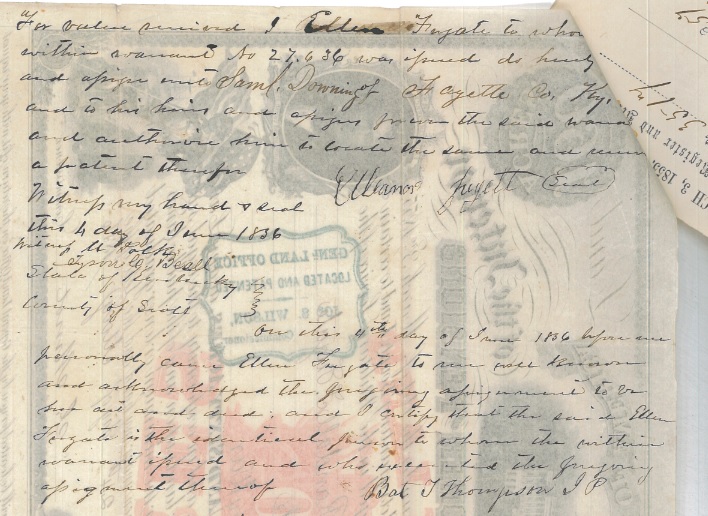 Given a quick look, the date of Elleanor’s assignment and the Justice of the Peace’s certification of her signature appears to be 4 June 1836. Obviously it is not. Just because a number looks like a “3” does not mean that it is a “3.” The warrant (looking at the reverse side) was issued on 24 May 1856 under authority of an 1855 act. It did not take too long for the warrant to make it’s way to Eleanor in Scott County, Kentucky, and for her to sell it and assign it. Documents must always be transcribed in context.

Eleanor did not receive any land herself based upon the warrant. The assignee, Samuel Downing, was the person who actually patented property based upon the warrant. At this point, it is believed that he had no familial connection to Eleanor. Research into Eleanor’s husband Randall Fugute is incomplete and it is possible that the connection was to her husband and not to her.

Assignees did not necessarily have any relationship to the warrantee and such relationships should not be inferred unless there is some evidence that suggests a relationship.

Eleanor (Newman) Harding Fugate was a sister to Augusta Newman (born in Maryland in the 1790s and died in White County, Indiana, in 1864).