In some families, “there’s no such thing as a divorce” because “we simply don’t do that.” And while there may not be an actual divorce, there may be some records that indicate the couple essentially was divorced even if they were not technically divorced. The two main records one may encounter in the United States that pretty much indicate the couple separated are:

The first is a court action and the second one is not. A case for separate maintenance will spell out how one spouse is to support the other while they are living separately. This will potentially include alimony, child support, property allocation, etc. The couple is still legally married.

In some cases there may be some sort of property settlement that appears in the land records–if the couple owns real estate. In that case, one spouse may release certain property rights to the other (usually rights of dower and homestead), there may be a cash payment from one spouse to the other, and chattel property may be assigned and have ownership specifically spelled out. Again this is not a divorce.

This is one story that does not always get passed down from one generation to the next and why it is always important to completely search all records.

Sometimes one spouse will publish a notice in the ne 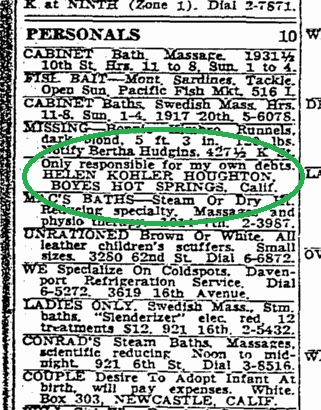 wspaper that they are responsible for their own debts. This suggests that there are financial, and perhaps other, issues within the marriage. The location of such a notice would suggest that other records be checked for either a divorce, property settlement, or separate maintenance case.

Maintaining separate residences in the same town is also suggestive of marital discord even if there is no other type of record generated. Census records, particularly if the husband is listed twice (once with the family and once by himself in a boarding house or an apartment) may suggest such a separation. They are not necessarily proof of it.

Just because there’s not a “divorce record” does not mean that your relative’s marital discord left no records. One just has to look.