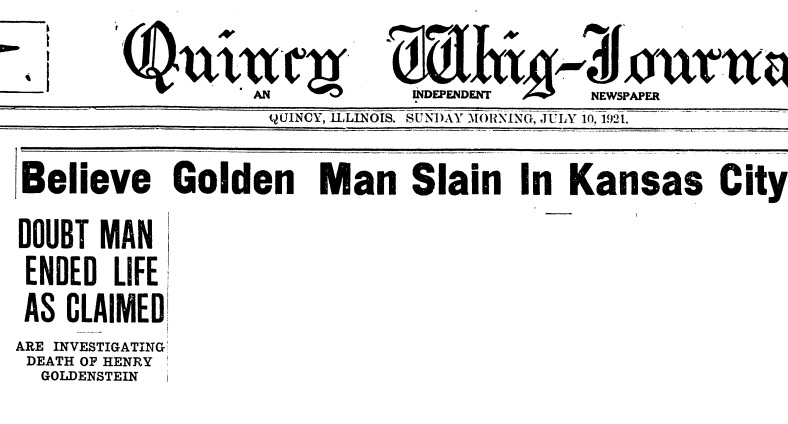 State’s Atrorney Garner and Sheriff Simmons and his force, aided by several physicians are making a determined investigation into the death of Henry Goldenstein, aged 31, of Golden, who was found dead in the Mid-West hotel in Kansas City, last Thursday morning.

Notwithstanding the telegram which was received by Mayor Thomas Carlin of Golden Thursday noon that Goldenstein had committed suicide, it is the firm belief of the dead man’s mother and friends that he met with foul play. Their suspiscions have been confirmed to some extend by the examinations made of the body by Dr. Peters of Clayton and one other physician, who say they can find no traces of Goldenstein having shot himself, as was reported. To add to their belief that Goldenstein did not take his own life, they point to the report that two other men, a minister and an attorney, had met with mysterious deaths in the same hotel where Goldenstein’s body was found within the past few days.

Little or no cash or other valuables were found in Goldenstein’s effects and he was identified by a receipt for a money order. He had been in fairly good health, and so far as his friends or mother were aware, there was not the slightest reason in the world why he should make way with himself. Those who were acquainted with the young man positively refuse to believe that he committed suicide, and subsequent events and the investigation as far as it has gone bear out this theory.

On the other hand, the sentiment is freely expressed in Golden, and it has been communicated to both the sheriff and state’s attorney, that Goldenstein was robbed and murdered, and the story then circulated that he had committed suicide.

Every effort is to be made by the authorities to probe the mysterious death of the young man to the very bottom in an endeavor to get at the truth.

Young Goldenstein was in Quincy last Tuesday on his way to back to Kansas City, after having spent several weeks’ vacation with his mother, Mrs. Anna Goldenstein, who resides on a farm just west of Golden. He was in good health at the time and if there was any reason why he should commit suicide or harbored any such intentions, he neither communicated them to his either his mother or intimate friends, nor did he give the slightest hint that he was weary of life.

To the contrary he appeared anxious [to be continued…]