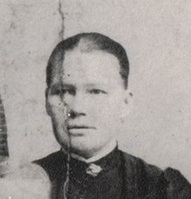 My ancestor table can be viewed on my site. Anna is my great-great-grandmother.

Leave a Reply to Sallie B Cancel Reply