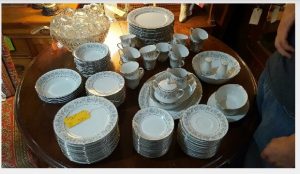 [This is a little different from our usual fare here, but maybe it will give readers the impetus to record their own stories about living family members while the details are somewhat fresh in their minds. Hopefully this makes for a colorful story for my daughter to tell her children and grandchildren.]

Two days ago, late on a Friday afternoon, my daughter sent me a text message regarding an important discovery she’d made at the local antiques mall. She and her fiance had found a nearly complete set of china that both of them liked.

Her message included a picture of the set the store had for available. She told me how much it was and included a detailed inventory. The set was in good shape and would be less expensive than buying individual pieces. There was one more advantage to this set of china.

It had her fiance’s blessing.

I wasn’t in a place where I could quickly call the antiques mall so I did the next best thing: I messaged them on their Facebook page using my cellphone.  I told them that my daughter had been in, roughly described the china, told them how much it was, and asked if I could pay for it over the phone with a credit card and pick it up later. I received a response within the hour and was told to call the store and that they could handle my request over the phone.

It all seemed so easy.

So I made the call.

I explained to the clerk on the phone what I wanted to do. I described the set of china and told her that it was a fairly complete set and how much it was. I told her that I had a picture of it and a listing of the specific items if that would help. I mentioned that I had communicated with the store via Facebook and they said I could call to complete the transaction.

I wanted to say “No, I don’t know how many items you have, but I’m trying to make it so that you have one less set of china.” I thought better of making the remark.

I explained that the item was not on Facebook but that was how I had discussed things with the store. Mentioning Facebook again did not solve the problem.

“I don’t know what items are for sale on Facebook.”

I messaged the store on Facebook again. They apologized for the clerk being unable to help me and , would hold the dishes for me, and told me that they would be glad to help early in the week when I came to the store. I thanked them.

I made a note to call them again on two days later on Monday and had decided to keep the entire thing to myself. This was supposed to be a surprise for my daughter. I didn’t think too much about it. 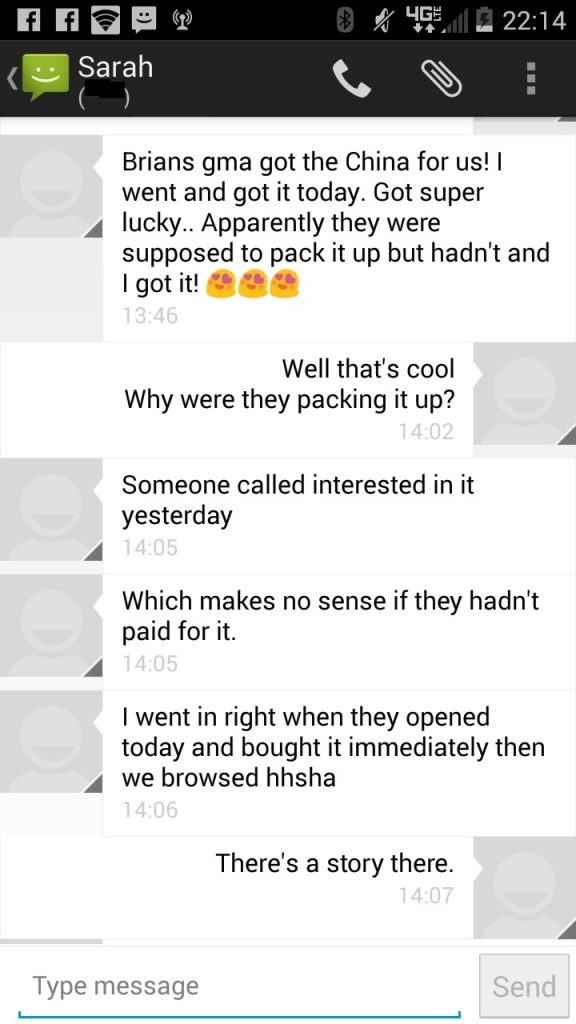 Sunday afternoon rolls around. I’m in Moline, Illinois,  and getting ready to head home I get a text message from my daughter.

Her fiance’s grandmother found out about the china after church that morning and told them she would get it for them as a wedding present. The daughter had made a beeline to the store to be there when it opened on Sunday.

“Apparently they were  supposed to pack it up but hadn’t.” The clerk told them that “some lady called the other day asking about it.”

I guess that lady was me.

I guess they hadn’t saved it or marked it or anything. And since the “lady” didn’t come for it, my daughter could have it.

Always the bargain hunter, the fiance was going to ask if they’d take 10% off the price, but didn’t when it was discovered that someone else wanted it.

The sales clerk told my daughter that it was “meant to be” for her to have the china since she got in there before the other person came in to get it.  She was lucky she came to get it when she did.

The sales clerk had no idea how ironic that statement was.