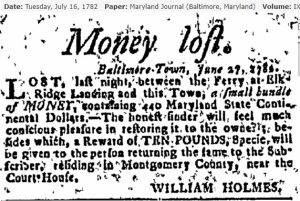 The “classified” section of a newspaper can contain a variety of items. This one is a little different.

The fact he lost 440 Maryland Continentals is perhaps a clue as well.

The notice is a reminder that: