On 1 February 1868, William S. Newman assigned his interest in the estate of Belinda Newman to Jesse G. and Joseph O. Newman. The assignment doesn’t specifically indicate the relationship among the men, but they are all sons of Belinda Newman, who had recently died in Linn County, Iowa.

A similar assignment is executed by Edward T. Newman, styled of Hancock County, Illinois, on 24 February of 1868. Edward’s assignment is witnessed by Andrew J. Newman. The handwriting of the two documents appears to be the same. 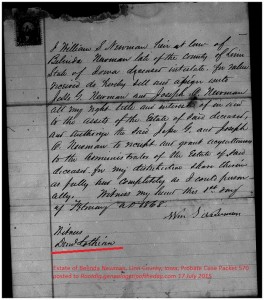 Except for the specific day and month on which the document was signed. That appears to have been in a different hand. There is one other difference between assignments as well. The document that’s in the same handwriting has the month “February” spelled correctly. On the other assignment the month is spelled “Febuary.” More evidence that someone “completed” the assignment signed by Edward T. Newman.

Daniel Lothian was a resident of Linn County, Iowa, where the estate of Belinda Newman was being settled and where she was buried. William S. Newman was a resident of Hancock County, Illinois, at the time his document was signed. He owned real property in the county and is enumerated there in the 1865 Illinois State Census and in the 1870 US census. It doesn’t seem realistic that Lothian would travel to Illinois just to have a couple of estate assignments signed. Based on the date and month of the second document it doesn’t even appear Lothian completely made out the Edward T. Newman assignment. 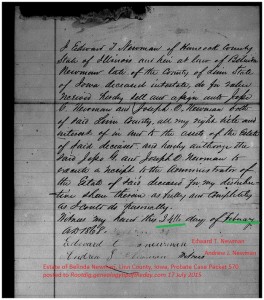 The document signed by Edward T. Newman appears to have been sent to him to be signed and witnessed. That’s the likely reason the day and month are in a different handwriting. And it’s worth noting that Edward’s assignment is witnessed by Andrew J. Newman, Edward’s nephew and a resident of Hancock County, Illinois at the time.

It appears based on these two assignments that William S. Newman travelled to Linn County, Iowa, from Hancock County, Illinois, in the late winter of 1868.

Whether it was just to sign the assignment is doubtful and is one question we probably will never answer.