Harm Habben died at the age of eighteen in Bentley, Hancock County, Illinois. After battling pneumonia for eight days, Harm died in the early afternoon of 17 March 1880. The German native likely didn’t die in the village of Bentley proper, although that is the location given on the death certificate and that’s close to to where he likely did die.

Harm likely died at home and while I don’t know exactly where the family lived in 1880, I suspect it was a few miles from Basco, Illinois–probably loosely between Basco and Bentley. That’s where various members of Harm’s family lived. 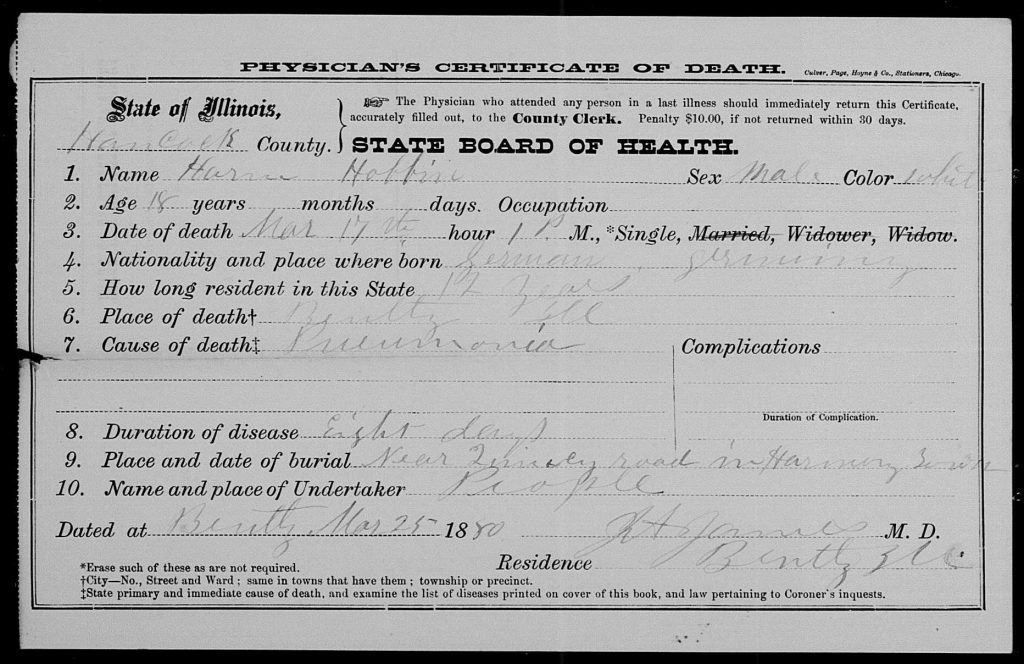 There’s no date of burial on this death certificate and the place of burial is somewhat vague as well:

Near Quincy road in Harmony Town

The reference to “Harmony Town” is actually to Harmony Township. The Quincy Road is still referred to that by a few locals (who seem to get older as time moves on) and was the former road that was used to travel from Carthage, Illinois, to Quincy, Illinois. The death certificate makes it sound as if Harm is buried in a small farm plot or merely along side the road. He was buried in Immanuel Lutheran Cemetery–which is somewhat between Bentley and Basco, Illinois, and south of Carthage, Illinois. The cemetery and the church are located in Harmony Township. The death certificate is not wrong about the location–just not as precise as one would like.

In my database when I refer to where Harm is buried–I do not cite his death certificate since it doesn’t technically say he’s buried in the Immanuel Cemetery. I can’t cite it for a date of burial either–since one is not listed. I cite my actual visit to the cemetery and the picture I have of his tombstone for documentation of his place of burial.

It may seem technical, but one should not suggest that a document includes information that it does not. The burial location listed for Harm is discussed in my notes for him as that location is consistent with his known place of burial.

That’s not the People Funeral Home. The reference indicated that locals in the area saw to the funeral arrangements. Harm had immediate and extended family in the area and there were quite a few fellow Ostfriesen immigrants who were near neighbors. They were likely the ones to saw to the preparation of the body and burial.