Ancestry.com recently announced that “Missouri, Western District Naturalization Index, 1848-1990” is new or has been updated. I wish they’d tweak the title as well for one reason:

Looking at the title may cause one to think that this database only includes Missouri. That’s incorrect. While there are records from as early as 1848 and as late as 1990, don’t think that “time”coverage is complete for all geographic areas that are included. These digital images are of index cards created by the federal government and are not the actual record. This index was created to help individuals locate copies of their naturalization records–not to serve as a substitute to those records and not to help genealogists. Ancestry has digitized these cards and indexed them (hence creating an index to the index). These images were created from items in Record Group 21: Records of District Courts of the United States, 1685 – 2009 with National Archives Identifier 572253.

The following sentences are gleaned from the National Archives site that discusses the records from which this database of images was created: 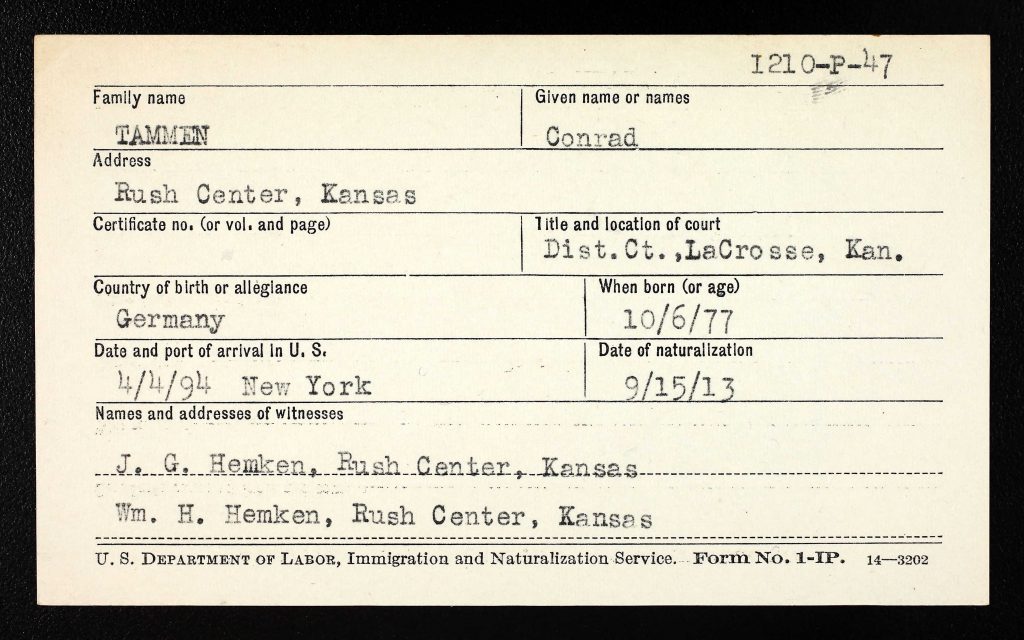 Index card to the naturalization of Conrad Tammen who was naturalized in LaCrosse , Kansas in 1913. Contained in NARA record group 21, National Archives Identifier 572253. [County crossed out thanks to an eagle-eyed reader]

The informational page from which the three preceding bulleted items was taken is https://catalog.archives.gov/id/572253.

Never take a title at face value. And don’t be surprised at who you find (and don’t find) in these records. And remember that these cards are a guide to the actual record–not a substitute. Always look at the next image in this database–sometimes comments were writtten on the back of the cards as well.