We are usually told to cite our sources because it allows us to go back and find things again if necessary and it assists us in the analysis of information.

Another reason: Reducing errors created by the researcher.

Creating citations after the research has been done can be time consuming, tedious, and repetitive process. For that reason, it’s a good idea to capture information needed for the citation as the research is being done. 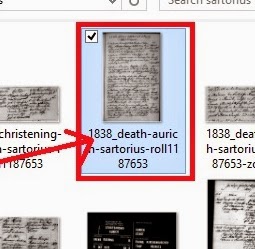 The screen shot shown in this post shows the file name I used for an image taken from the section of deaths in the records of the Evangelical church in Aurich, Ostfriesland, Germany. The entries are unpaginated and they are organized by year. My goal with the file names is that they be long enough to contain relevant detail to get me back to that image if I needed to and to allow me to find the file by searching on the contents of the file name–just in case I save the file and can’t remember where I saved it on my computer.

When taking digital images of the desired record, I always make an image that includes the record of interest and the “top of the page” (usually the whole page to be honest). There are several reasons for this:

Sometimes page numbers are on the bottom–that’s when copying the whole page is advised.
Then I usually copy just the item of interest, magnifying the image to make it easier later to read all the image. 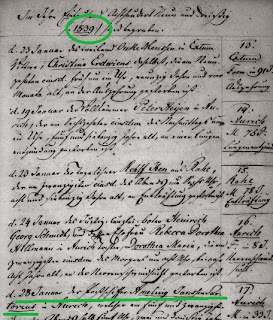 Turns out there’s another reason I should include the entire page: reduce the chance I make careless mistakes.

The file name I used to save this image included 1838 for the year of the record.

The year listed on the actual record is 1839.

I was simply off by a year.

If I had only made an image of the entry for Ameling, the year would not have been included–just the month and day.

And then later I would have wondered why I was off on his death by one year.

And someone else could have copied that information and it could have been repeated over and over.

But…because I made an image of the entire page, I caught my error.

And I caught it because I was thinking about citations while I was actually researching.

One more reason to cite your sources.